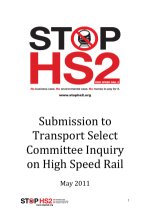 Stop HS2 is pleased to announce that the written evidence we submitted to the Transport Select Committee inquiry on High Speed Rail has been accepted.

We were told it will be available on their website from the 7th June, but a little bird told us it’s there already – see it here.

You can also download a pdf file of our evidence here.