An internal government audit into HS2 Ltd redundancy schemes which involved payouts significantly higher than allowed by the Department for Transport (DfT), has shown a number of flaws within HS2 Ltd’s processes. These flaws show a company culture which Stop HS2 says is not “fit for purpose” with “HS2 Ltd running their own gravy train with their snouts in the trough of taxpayers’ money”.

A Public Accounts Committee hearing into the redundancy payments will take place on Monday 30th October at 5pm.

The audit conducted by the Government Internal Audit Agency has been made public on an “exceptional basis” due to the seriousness with which it is being taken. This follows a National Audit Office report in July this year, which identified redundancy payments of £2.76m in the previous financial year, of which £1.76m compromised of “unapproved enhancements” and which had been expressly forbidden by Transport Secretary Chris Grayling. 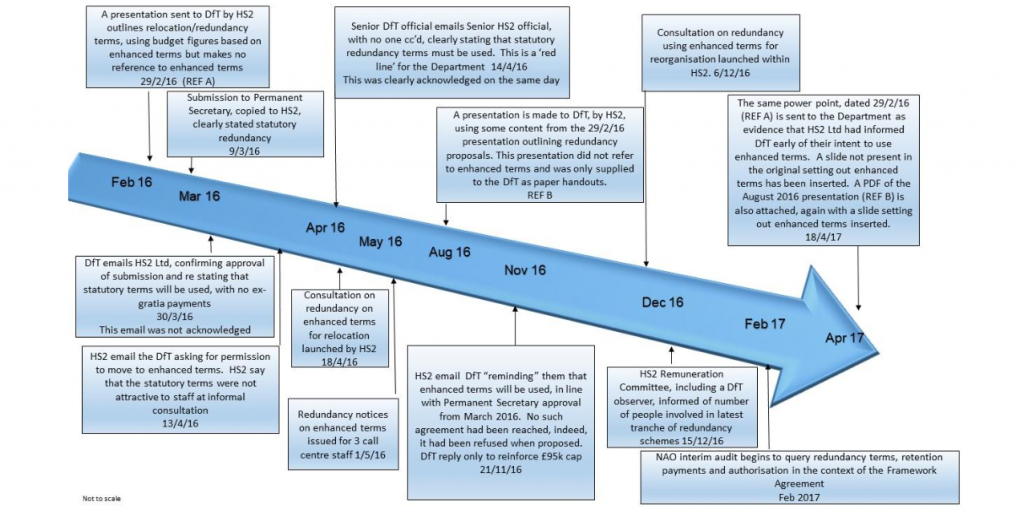 “This report is yet more evidence of HS2 Ltd running their own gravy train with their snouts in the trough of taxpayers’ money. What’s more it points to a company culture which is willing to let the Department of Transport be misled about excessive payments to HS2 staff and then alter the evidence. Right from the start HS2 Ltd have acted like a law unto themselves, ignoring the public. Now it seems they ignore direct instructions from the Department for Transport as well. This is a company which is simply not fit for purpose. And yet the Government are trusting it with £56 billion of taxpayers money.”

The Government audit refers to a lack of effective record keeping from both HS2 Ltd and the Department for Transport, with the report stating

“Neither organisation has demonstrated effective record keeping of key decisions in this process, often reliant on emails held in personal inboxes” and states that a lack of response to an email was often assumed to mean agreement.

The audit also says that minutes from HS2 Ltd working groups – since disbanded – that discussed the relocation and redundancy packages are no longer available. On the voluntary redundancy policy available to the audit team, they say

“8. We have obtained a voluntary redundancy policy from the company but no minutes exist to demonstrate where this policy was approved – we believe by now defunct management panels. This policy does not detail how amounts of redundancy should be calculated, but does require the creation of an Exceptions Panel to consider individual cases where necessary. No minutes have been found for the exceptions panel so we cannot confirm whether it met to consider any of the individuals highlighted by the NAO as being paid in excess of £95k by the NAO’s definitions. “

Following discussions on redundancy payments between HS2 Ltd and the DfT in February and March 2016, the DfT directly instructed HS2 Ltd that “any variation from statutory terms required further permission from the Department.”

“21.We have an email record that, on 13/4/16, HS2 Ltd requested permission to run an enhanced scheme as they believed the statutory scheme was unattractive to employees. On 14/4/16 there was a direct email from a senior official in the Department to a very senior official at HS2 Ltd, which was acknowledged and accepted on the same day, that any scheme must be statutory – this was a “red line” for the Department. There is no evidence that this instruction was disseminated further within HS2 Ltd, creating a ‘single point of failure’. ….Immediately following this email exchange, on 18 April 2016, a consultation was issued relating to the relocation from London to Birmingham. This included enhanced redundancy terms for impacted staff. Similarly on 1 May 2016 redundancy notices, again on enhanced terms, were issued to 3 call centre staff.“

The audit refers to a presentation with a creation date of February 2016, which was altered before being sent to the National Audit Office in February 2017:

The audit also refers to a suspicious email, with the report saying

“31.During the course of this audit we have identified that an email was created by an official at HS2 Ltd that, had it been sent when it purported to have been sent, would have shown earlier communication of the full extent of the redundancy scheme to the Department in the Spring of 2017. Interrogation of IT servers has demonstrated that this email was not sent but it appears to have been created to demonstrate earlier communication. Why this was done is unclear, but this was clearly too late to have prevented the scheme and the individual involved has left the company.”

The Financial Times reports that the departure of HS2 Ltd’s Chief Financial Officer from the company follows pressure from the Department for Transport and describes Chris Grayling as “apoplectic”.