When it was announced that CH2M Hill had been given the £170m contract for HS2 Phase 2b development partner, we pointed out, not for the first time, that the whole thing smelled of gravy, with both Roy Hill, the boss of HS2 Ltd at the time being on secondment from that firm, and future one boss Mark Thurston due to come in from CH2M Hill too. The announcement was also exceptionally conveniently timed, as it was announced just days before it was revealed that CH2M had come in 49% over budget on their £70m contract for the same thing on Phase 1, with HS2 Ltd happily paying out £104m for that work.

Of course HS2 Ltd have insisted that ‘Chinese Walls’ kept Hill away from any decisions on contracts, but it turns out it was more likely that ‘Chinese Whispers’ were the order of the day, as Hill wasn’t the only person on secondment from CH2M at HS2 Ltd, there are another 200 of them according to Construction News. 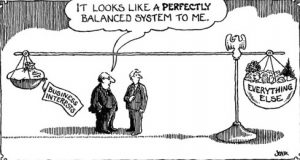 As we have long said, HS2 has got this far because it has been lobbied for by the construction industry, but no-one ever imagined that quite so many of the staff of HS2 Ltd are actually direct employees of their subcontractors.

This revelation makes it seem quite unlikely that there absolutely was not one single CH2M Hill employee involved in the assessment of contract tenders at HS2 Ltd, and makes it hard to believe that there was never once sensitive information relating to the bids passing between the two organisations. This also raises the question of just who the people involved in appointing first Hill, then Thurston actually work for, and indeed just how many other HS2 Ltd staff are on secondment from other construction firms.

Now, after the threat of legal action from Mace who were one of the losing bidders, the contract signing which was due to happen today (27th February 2017) has been delayed, with Mace being asked in for a private meeting. We will watch this space.