HS2 Ltd have published partial details of 120 amendments to the HS2 plans to be debated on in Parliament on Tuesday, following complaints for MPs and members of the public.

Next Tuesday (23rd June) approximately 120 amendments to the HS2 Hybrid Bill are due to be debated and voted on in the House of Commons. However, the plan had been that not even the MPs who will be asked to vote on the amendments on Tuesday would actually have seen them at that point.

The day before the vote, the HS2 Hybrid Bill Committee will tour the Chesham and Amersham constituency of Cheryl Gillan MP. Thursday 18th June, she raised this point of order in the House of Commons:

“Perhaps you could advise me, Madam Deputy Speaker, on whether that is the correct procedure for this House, because it seems to me that my constituents and this House should know about those additional provisions prior to the Committee’s visit, and prior to the business before the House next Tuesday. As I understand it, those additional provisions might not be available until the second week in July.”

Furthermore, staff in Mrs Gillans office confirmed that the only documents available to MPs in the House of Commons at the time were a briefing produced by House of Commons staff which simply lists the parishes and boroughs where changes will take place, and a press release from the Department for Transport, which mainly focussed on claiming HS2 is ‘on track’, despite the original timetable stating the bill was meant to have become law before the General Election.

In addition Mrs Gillans query, the Stop HS2 campaign understands that the HS2 Hybrid Bill Committee who are currently scrutinising the plans, were not impressed that people affected by the changes would not be able to give feedback to their MPs about them before the debate on Tuesday. 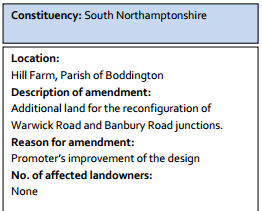 According to HS2 Ltd, taking additional land doesn’t have to affect landowners

Following this pressure from parliamentarians, HS2 Ltd last night (Thursday 18th) published some explanatory information, which provides minimal details on the changes, which will include taking land from 69 new landowners as well as more land from ones previously impacted. The competence of HS2 Ltd has to be questioned by their claim that 18 of the changes to the design which include taking new land, diverting or adding highways and extending a viaduct do not affect any landowners at all.

However, this additional information does not represent detailed information. Notably in the Lichfield area, where the most significant change involves tunnelling under the A38 instead of going over it, there is no indication of what the height of the line would be. 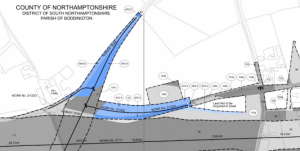 Taking the land marked in blue won’t affect any landowners, according to HS2 Ltd

“Instead of providing details of what MPs would have to vote for, the priority this week from  Government was to produce a press release claiming HS2, which they originally wanted to have been passed by now, is ‘on track’. Although the reality is that they have been forced into making changes after being embarrassed in front of the Bill Committee, they had the cheek to say they have come about because they are ‘working with’ and ‘listening to’ communities. Given that they did not want to tell communities what the changes were until they were forced to, those words are completely hollow.”

“It is unbelievable that the Government wanted MPs to vote on something without any details whatsoever. Even now, MPs will only have a sketchy idea of what they are voting for on Tuesday, because the information which has been reluctantly provided at the last minute is clearly incomplete. There can only be one reason for not publishing the full details; that they have not been produced yet, which is typical of the half-baked guhg-ho way this Government want to steamroller HS2 through.”

“This is a depressingly familiar tale, where significant changes are made to the HS2 plans and MPs are expected to vote without the information to assess what these changes mean for the project and their constituents.”

“With the Select Committee visiting the area where some of these changes are made on Monday, HS2 Ltd should have made information about these changes available to affected constituents already.”