Commuters, businesses and rate-payers where HS2 stations are planned such as Camden, Manchester, Sheffield, Nottingham, Hammersmith & Fulham, Solihull, Trafford, Birmingham and Leeds, and places bidding for HS2 stations such as Derby, Crewe, Liverpool and Stoke should all be worried about further cuts to local transport, additional business rates and council having to contribute to HS2 spending, following the announcement of an uncosted ‘Bubble-Wrap Slug’ HS2 station for Birmingham, says the Stop HS2 campaign. 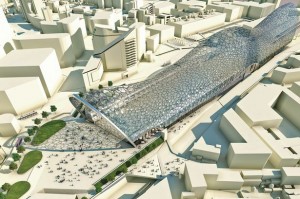 Last week, HS2 station plans for an HS2 station in the centre of Birmingham, which would not connect with Birmingham New Street Station, were announced, with not a hint of what the station would cost, how much it would cost, or more importantly, who would pay for it.

The Conservative Transport Group recently warned that HS2 terminal stations could become white elephants, and parkway stations would also not justify their construction.

Former Transport Secretary Philip Hammond was clear when he was in office that he expected places which ‘benefit’ from HS2 to help pay for stations, a year ago it was reported that Sheffield would have to pay £500m toward the Meadowhall station, and in the case of Crossrail, the majority of funding has not come from Central Government, but for a combination of the Local Authority, a levy on business rates and contributions from Transport for London. Section 7.2.12 of the latest HS2 strategic case clearly states:

“There will be an uplift in land value resulting from the new line. We are considering the implications of this. Where there is a case for a contribution to the project – whether it is core project support, land, or aligned investment – we would expect those parties to contribute.”

While there has been no mention of how much recently announced Birmingham Curzon St station would cost, when plans for a revamped Manchester Piccadilly were announced, Manchester City Council leader Sir Richard Leese said no figure had yet been put on the cost but that it would be ‘ten figures’.

“We have seen lots recently for proponents of HS2 saying how great it will be, without any mention of who will pay for it. Pro HS2 lobbyist do not want to say that commuters will pay via increased fares and services cuts, that businesses will have to pay increased rates and councils will have to make more cutbacks to cough up for the supposed benefits of HS2, but that is the truth and the public need to know.”

“It is unbelievable that the proposed HS2 station in Birmingham which resembles a slug made out of bubble-wrap got so much press coverage, without one question about how much it would cost and who is paying for it. It is time that Government and local authorities came clean on who will pay for these HS2 stations. With Crossrail, the majority of the funding didn’t come from the DfT, and  if local passenger transport executives who are already cutting back will have to cough up for HS2 stations, along with councils having to pay and businesses facing a hike in rates to pay, the measly level of support for HS2 completely drying up. It is not just that places which get stations will have to pay extra to get HS2, bit they will have to pay extra to plumb it in as HS2 is not an integrated transport solution.”

“HS2 will fail to deliver on its promises, and the costs will have to go up to overcome those problems. It is time politicians own up about the fact that HS2 is a daft idea, there are more urgent priorities facing the country, and that places which are bidding for stations will have to pay far more than they are letting on to be lumbered with this lumbering white elephant.”

“There have always been lots of claims that HS2 will regenerate the areas around stations, but no-one has said where the money to pay for it will come from.  City councils act as if they expect central Government to pay for it, but on numerous occasions the Department for Transport and HS2 Ltd have said they expect the money to come from someone else.  With HS2 costing tens of billions just to build the tracks, the costs of building the stations and developing the local areas should be made clearer.”