As ministers meet at Chequers to discuss Brexit, there’s one major project that has already turned away from Europe – HS2.

Right from the start, HS2 was designed without a link to HS1 on the grounds of “who would want to go to Kent?”.

It didn’t occur to any of the geniuses designing HS2 that HS1 was also the route of the fast train to the Channel Tunnel, and hence the route to Paris, Brussels and beyond.  Or maybe they didn’t care.

When Philip Hammond (now Chancellor) was Transport secretary, a rail link was added to the plans. It was described in the January 2012 decision document issued under Justine Greening as ‘potentially very important’ and that there was a ‘strong strategic case for ensuring that a high speed rail network in this country connects directly into the many thousands of miles of network in operation across Europe.’

As part of his cost savings review which failed to find any savings but did descale the project in a number of ways, David Higgins suggested the HS1 link was dropped. 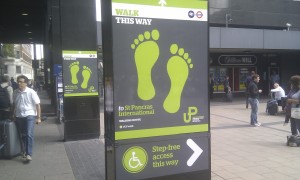 email
Tags: News
News
One comment to “HS2 already turned away from Europe”