The Department for Transport has replied to a Freedom of Information request for the latest Major Projects Authority report  on HS2, claiming that there hasn’t been one conducted since 2014.

Whilst the MPA changed into the Infrastructure and Projects Authority on January 1st 2016, in 2015 they had been scheduled to report on HS2 twice in 2015, as they have done every year since their inception. This assumption seemed to be proved correct by a response from HS2 Ltd to a request for the first 2015 MPA report on HS2, which states:

“There were three meetings on 8, 16 and 17th September 2015 with the Senior Responsible Owner for the project to discuss the recommendations of the report.”

So how does the DfT come to this conclusion below?

“The last MPA report giving an overall delivery confidence assessment (traffic light rating) for the whole project is the December 2014 MPA report on HS2. This report is subject to your earlier request (F0012817) which we have withheld on reliance on the exemption of section 35(1)(a) of the FOI Act. We do not hold a more recent report covering the overall HS2 project.” 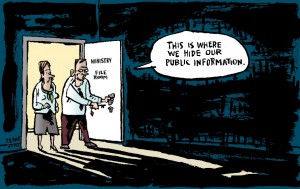 Well it’s simple, and can be found buried in the last line of a report on Phase 2a of HS2 from Handsacre to Crewe. In this report, it is mentioned that the project has been rated as ‘amber’ by the MPA, which you might feel is a significant improvement on previous ‘amber-red’ ratings. However, it’s clear that this ‘amber’ rating is not for the HS2 project as a whole, but just for Phase 2a.

So what has happened is that, for reasons best known to themselves, the MPA has decided not to report on HS2 as a whole anymore, but instead have broken it up into parts, probably in line exactly with the proposed Phases of the project. Of course the response from the DfT doesn’t give anyone a clue as to the fact that is what has happened, symptomatic of their attitude to ‘Freedom’ of Information, they don’t even want to give the public enough information so that they know what questions to even ask in the first place.

The other thing this whole thing proved is that the decision to split Phase 2 into two sections was made a long while before there was any ‘official’ decision. But I doubt that surprises anyone.

Subsequently, EIR requests have since been made to HS2 Ltd, the DfT and the Cabinet Office asking for all MPA reports on HS2 conducted in 2015, but don’t hold your breath on their publication.