Ian Reed describes the Polesworth HS2 roadshow from earlier in October. HS2 Ltd had not originally scheduled a roadshow in Polesworth, but pressure from local MP Dan Byles eventually forced them to change their mind. 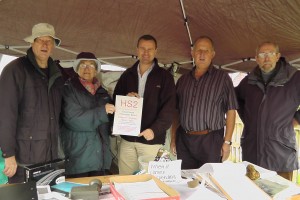 Despite the wind & rain there was a fantastic turn out from the people of Polesworth & surrounding villages, We even had people coming from Tamworth as well.

The gazebo was in one sense our greatest concern with the rain and the wind. More than once we had to hold on to it to stop it flying off but with the help of ropes tying it to the nearby fence, a hefty toll box and a spare wheel helping to hold it down we survived the day.

The amount of people that came to the HS2 roadshow was about 450. That is a tremendous response to the hard work that Polesworth Stop HS2 group done along with Dan Byles office. Without all those letters being delivered and notices put up around the village I don’t think we would have had the same response. It’s also interesting how many people have noticed the two white elephants on the B5000 showing where the line is proposed to cross.

At the Shadow road show almost all the day we were busy giving information out, selling car stickers and white elephant pins. We also were finding out from those who had been into the roadshow if their questions were answered, sadly it seem it’s the same old answer that we got. The HS2 staff were unable to put peoples minds at rest with questions specific to there needs. They could not even confirm if in Birchmoor the M42 would have to be moved for work on the HS2 line. Something that they said would happen back in January when phase 2 was announced.

The HS2 staff though were very kind to us in the fact that while they were in the dry & warm they offered us tea and coffee. It was also interesting that one of them said that if they weren’t working for HS2 they would be against it. Another said that “The people are angry in a very English way”. And yet another was impressed by the turnout saying that more had turned out than both Water Orton and Middleton roadshows combined.

So although being cold and wet it was with some warmth that Dave & I packed up the Shadow roadshow knowing that we had got the message out to Polesworth and surrounding area and had been vindicated in insisting to have a HS2 roadshow in Polesworth.

Now what of the Kingsbury HS2 roadshow?