On Friday, a series of letters organised by the Campaign for HSR were published in several different newspapers.

It’s another in a set of statements we’ve seen from them, touting things which sound like they might be true, but are completely made up. Internationally, high speed rail has been a disaster, Portugal and Poland have just last month cancelled their programmes and in France even the President of SNCF, Guillaume Pépy has said “We risk having longer and longer high-speed lines which are used less and less.” We are not lagging behind other countries as journey times in the UK are already shorter than our European competitors.

HS2 will create a fraction of the jobs which could be generated by spending on other areas and we won’t see any of that employment for decades and the cost is simply too great. Business leaders in the north should be more interested in improving local transport links than dreaming of the service they will get in the first class section of HS2.

We do need improvements to infrastructure, but you can deliver more benefits to more people more quickly for less money by upgrading the existing rail lines. This is simply a much better option than building the fastest, most expensive railway in the world. High Speed Rail does nothing for the vast majority of rail users, but they will end up having to pay for it and we know the final cost will be well above the £33bn price tag.

High Speed Rail is a 19th century solution to a 21 st century problem. If we really want to create jobs, revolutionise the economy and get ahead of competitors, we need to be investing a fraction of the amount that could be wasted on HS2 on high speed broadband, that is the future and a strong lobby from those with vested interests in the construction of HS2 should not be allowed to dictate policy.”

No doubt the people who signed these letters did so in good faith, perhaps aware that an early Campaign for HSR fundraising dinner was attended by Philip Hammond. But its a shame that they didn’t spend longer checking high speed rail out for themselves before they agreed to put their names to the letter. 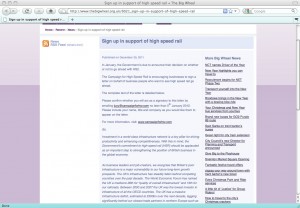 Screenshot of the request for signatures by the Campaign for HSR

Whatsapp
Tags: News
News
8 comments to “Did they read the letters they signed?”