Because no-one at HS2 Ltd or in Government seems to listen when it comes to the many well-founded arguments against HS2, you can find yourself saying the same thing over and over again and sometimes come to the conclusion that they will never listen. The fact there are serious issues with ground stability and clearly evidenced and severe historical subsidence in many areas is one of these arguments. 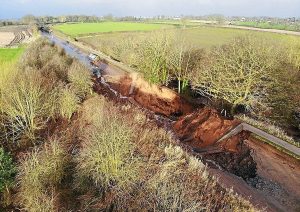 Well, as of last week this is surely an issue they can no longer ignore in Cheshire, following the opening of a gigantic sinkhole that drained the Shropshire Union Canal at Middlewich, just a couple of hundred yards from where HS2 is intended to cross. The fact there are serious issues with ground stability and clearly evidenced and severe historical subsidence in many areas is one of these arguments.

This area has been troubled by subsidence for centuries, something which got considerably worse when abandoned salt mines were left to flood. One of the things we always point to is the M6 in the area, which starts to look like it is setting off toward Manchester, but then bends back.

This kink was put in the M6 solely to avoid the Cheshire brine fields, but of course when HS2 was being planned, then 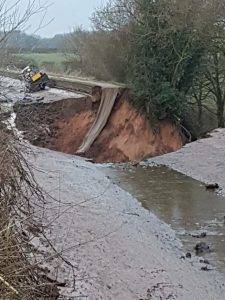 Chancellor George Osborne wanted to avoid Knutsford and Alderly Edge (the richest bits of his Tatton constituency) so ordered the route to specifically go through the brine fields at an extra cost just for the surface route of £600m, earning him the nickname “The six hundred million dog-leg man”.

Consequently, when the HS2 route was announced, HS2 Ltd didn’t know about the any of the existing underground infrastructure or the subsidence issues, and they have been stuck with this route ever since which has also sterilised caverns which had been earmarked for gas storage, which many would argue would be a far more important addition to national infrastructure.

The fields next to the canal, which at the point of the sinkhole is on an embankment, were historically brine pumped and the ground has been 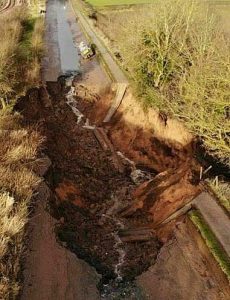 sinking all around for years, something which was identified in a recent independent geological report.

A little further north, following the direction of the HS2 route the Croxton aqueduct has collapsed three times due to salt mining subsidence, most recently in 2012.

Now that they know about the ground conditions, HS2 Ltd engineers have genuinely described them as “spicy”.