It has been reported, in the final edition of the Independent on Sunday that Labour leader Jeremy Corbyn is ready to enforce a party whip on Wednesday to ensure Labour MPs vote for the HS2 Phase 1 Hybrid Bill. This is a stark turnaround for Mr Corbyn, who originally voted against the HS2 Paving Bill, and was absent from the first vote on the Hybrid Bill. 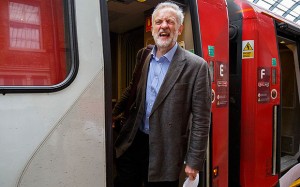 The signs that Corbyn was being got at appeared during his election campaign, when his final ‘Northern Future’ document was published, edited to remove the lament that the Tories “have suspended the much needed investment in rail infrastructure in the north to fund HS2, a project with the aim of turning our great regional cities into dormitories for London businesses”, which appeared in an earlier draft of the document.

Since then Corbyn has said that backing of the £46bn HS2 project would be conditional on getting “guarantees” it would not divert money from other rail projects, which have not been forthcoming. He had said: “I’m open to persuasion on increasing rail capacity. I’m concerned – and I want guarantees – that it [HS2] isn’t going to lead to removal of capital investment in the existing rail network and the need for improvements to it.”

By November last year, he had somewhat thrown in the towel, and seemed not to be aware that as leader of the opposition, he has a big say about whether HS2 goes ahead or not, saying:

“I expect by the next election HS2 will be under way and we will be dealing with the consequences of it. I have a view, which is probably too late now as the decision has been made on the southern section, that I would have started the other way round, from Birmingham going northwards to Leeds, Manchester and Newcastle. I think we need to get a message out that we’re not directing all rail investment to London and the South East – and I say that as a London MP.”

Meanwhile, his shadow chancellor John McDonnell, had told the Department for Transport in 2013 that he was “not willing to lend his support” to HS2 “given the complete lack of information on the impact” on his constituency.

However, now both seem to be happy to back HS2, and tell other people to do so too it seems. This is all despite the advice of Corbyns economic guru Richard Murphy and of course adivsor to McDonnell, Jonathan Portes, both below.

Just say no. This is the wrong type of infrastructure for our needs – economic, social and environmental https://t.co/7qRXPuh7K4

To contact your MP ahead of the vote on Wednesday, visit www.writetothem.com

email
Tags: News
News
2 comments to “So much for principles, Corbyn is ready to whip for HS2.”