A new report has been released giving the results of a passenger survey, whereby train users were encouraged to put forward  suggestions for facilities to be included, when drawing up final plans for the high speed train. 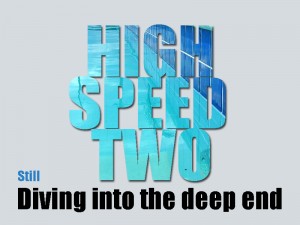 “One such idea was that we have a doctor’s surgery on board, totally impractical of course, because the train would mostly be running ‘out of hours’”.

“Having fares, ‘affordable to the masses’ was another bright idea, hardly likely to be popular with our first class passengers is it? We have to keep up certain standards, otherwise who knows what class of people will be climbing aboard, with their egg sarnies in one hand and a basket full of ferrets in the other?”

“Sadly we had to bin the idea of having a gourmet restaurant on the train, as it takes time to create good food and we must remember it is a high speed train”.

“Left with only pizzas, fried chicken and burgers, we decided it would be better to forget about meals completely and concentrate on providing really good quality hors d’oeuvres in the First Class champagne bar instead”.

“If and when we ever get as far as providing a link to Scotland, we might include a ‘porridge restaurant and bar’ on the really early trains”.

“A gymnasium was one of the better ideas to spring forth, we could harness the energy produced by rowing and cycling machines, as a backup for whenever there were power cuts. The train does take a great deal of energy and without building new power stations it is wise for us to have an alternative option”.

“Forward thinking, that’s what it’s all about, when HS2 is finally built, it will be talked about all over the world.”

I was inclined to agree with him.