This guest article was written by Finmere, a regular visitor and commenter to our site.

How often do you hear the argument that we are part of Europe and they have high speed railways so we must build them too? It’s like saying that if your neighbour has bought a new car, you have to get a new one as well.

But would you be willing to pay over 4 times as much as your neighbour did?  Yet that’s exactly what our government is proposing we do with HS2.

HS2 is not a straightforward railway. It cuts across a densely populated region and some difficult topography. Deep cuttings, viaducts spanning valleys, 20 kilometres of tunnels, and numerous bridges. And that does not come cheap.

These figures show the comparative costs of HSR in the UK compared with other European countries.

Or in graphical format: 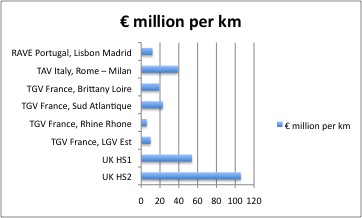 The comparative cost for building HS2 is 4.3 times higher than the European average.

Would these other countries be building these railways if the price was the same as here in the UK?

email
Tags: News
News
19 comments to “Keeping up with the Joneses – or Les Français”