The leaders of both The Green Party and UKIP have responded positively to a poll conducted by Com Res, which vindicates their parties’ opposition to HS2. Only 22% of the public said they were in favour of the construction of the railway line when asked if they would support the projects at the current official cost of £50bn, the lowest level of support recorded since polling was first conducted in January 2012. 43% of the public put it as their last priority in a list of eight spending options.

“This poll shows that the public do not see HS2 as a priority and that it is not wanted or needed. Our politicians are really living in the Westminster bubble, they are determined to carry on with HS2 against the wishes of the public and I pledge that UKIP would scrap HS2.”

“UKIP wants to scrap HS2, and it is clear that the overwhelming majority of the public are on our side. It is not good value for money and it will divert already scarce public funds away from other investment that is much more urgently needed to improve our transport and communications infrastructure.”

“HS2 is a total waste of public money.  With so little public support, there is no case to spend so much to build a rich man’s railway.  There should be investment in real public transport for the common good of us all.”

“It’s nonsense to say we can waste billions on new roads or on HS2 but we can’t afford to keep people warm in their own homes.” 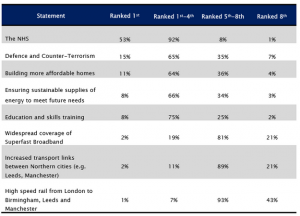 Just 1% of British adults told ComRes that high speed rail from London to Birmingham, Leeds and Manchester (HS2) is their top priority for government spending, the lowest of all options tested. In addition, only 7% of British adults say that HS2 is one of their top four priorities for government spending. When asked if they would support HS2 if the costs increased, support for HS2 fell even further, with only 13% supporting it at a cost of £70bn, and just 7% at a cost of £100bn.

“It is amazing that politicians from the main parties think that HS2 is a vote winner, when every poll has made it clear that the public have not been bought by the spin about HS2. This latest poll shows that despite all the spin and political bluster trying to drum up support for HS2, its’ support for HS2 keeps on dropping, and is now in the basement.”

“The fact the politicians fly in the face of public opinion by pushing HS2 forward is just another demonstration of how out of touch they are. With more austerity promised by most of those standing in the election, how can they possibly think people want HS2? The whole concept does not compute with voters, and there are surely votes to be won by anyone saying they will cancel HS2.”