According to the No Palaver Group, rail construction workers now have the highest average weekly pay in the construction industry, with weekly pay rising from £492.40 in 2012 to £856.50 in 2014. This 74% increase is in comparison to a 0.9% increase for the sector as a whole for the same period. The figures from No Palaver, a leading provider of accounting services to contractors, show average pay of rail construction workers has massively outstripped the average pay in the sector, which has only risen from £582.50 to £587.70 per week between 2012 and 2014.

In November, a study by the University of Dundee claimed HS2 will need an average monthly workforce of 11,580 over the fifteen years during the construction of HS2, meaning this two year wage increase alone would add over £3 billion pounds to the current £50bn official cost of the project. However, the current official costs for HS2 are still based on 2011 prices with construction not due to start until 2017 at the earliest, so the eventual wage related cost increase to the project could be much higher. 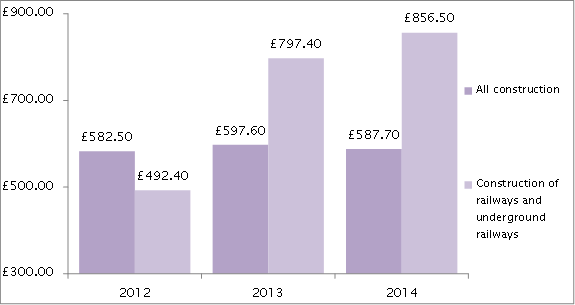 “Ever since HS2 was first announced, the projected costs have gone up and this will only continue. Adding in just these two years of wage inflation in the rail construction industry would jack up the bill by over three billion pounds, but with the costs still being based on 2011 prices, there will be six years of wage inflation to add before construction is due to start and twenty-one years of inflation to add by the time the buffers go down in Manchester and Leeds.”

“It is completely fraudulent for the Government still to be using 2011 prices when they are talking about the projected cost of HS2. These figures need updating so the public can see just how much of a waste of money this white elephant would be.”