Today, HS2 Ltd published the first in a series of amendments to the HS2 Phase 1 plans to make up for the complete cock-up of missing loads of obvious stuff out the first time, like the proper way to move electricity pylons and underground fuel pipes. Out of the amendments, only one of them requires HS2 Ltd to take less land, but this will be of little comfort as in that area, Stoke Manderville and Aylesbury, there are six other amendments which will take up more land.

As suspected, there have been no additional provisions announced for London, meaning the redesign of Euston Station has not been done, meaning this and maybe the Heathrow Spur are still to come.

With the depressing inevitability of incompetence from HS2 Ltd, yesterday Under-Secretary of State Robert Goodwill was telling Parliament there would be 55 ‘minor amendments’, but pages 3-6 of Volume 1 of the HS2 Ltd environmental statement list only 54.

Probably the best part of the document explains what has happened regarding proposed works around utilities. The Additional Provisions Environmental Statement (which appropriately is shortened to ‘APES’) reads:

“Discussions with utility companies following submission of the main ES have identified refinements in working methods and land requirements for utilities works that have led to many of the amendments described in this APES. This section therefore provides information on the working methods for the following utility works:

It should be noted that these are standard construction methods, which are used by utilities providers on a regular basis to undertake works of this nature.”

That may be what it says, but this is what it really means:

“Despite the fact we have been working on this boondoggle for over five years and local residents have been asking questions such as ‘What about the oil pipeline you are going over?’ for ages, we couldn’t be bothered with irrelevances such as the fact that we might end up cutting off the power across five counties.” 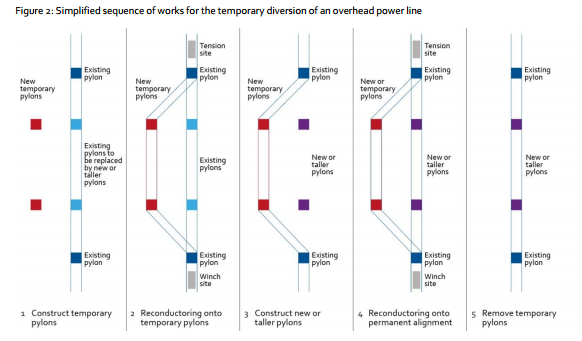 “We didn’t even bother contacting the utility companies, and it was only after we published our hair-brained plans that they rang us up and asked ‘What planet are you on, you muppets?’.”

“When they told us that our incompetence could cause a disaster that would make the Buncefield explosion look like a birthday cake, we decided that they should tell us what to do, because despite the fact we have an army of over-paid engineers, not one of them had a clue what the standard construction methods for such things were.”

There will now be another petitioning period concerning the additional provisions, but we believe this will not start until the last planning notice has been published in the press, next Friday. The petitioning period will end on Friday October 17th, and like last time, petitions will have to follow an arcane format and be physically deposited to Parliament in quadruplicate, despite the fact it is OK for Hs2 Ltd to provide their documents in electronic format. The one bit of good news is that existing petitioners will not have to pay their £20 again, which Goodwill condescendingly referred to yesterday as ‘buy one get one free’.

There may be some minor changes, for example the requirement for existing petitioners to reference their original petition when submitting a new one, but we do not expect there to be any big changes. As such, here is a link to our original guide on petitioning, which besides the issues explained above, should remain comprehensive.

Besides the additional petitioning period, there will be an accompanying consultation on the Additional Provision Environmental Statement. For whatever bizarre reason, whilst petitions will have to be in by October 17th, the deadline for the consultation is November 14th.