Last Friday, Sir David Higgins appeared in front of an audience at the Institute of Directors, a body which has been sceptical of HS2 to try and convince them of the benefits of HS2. He was far from convincing. 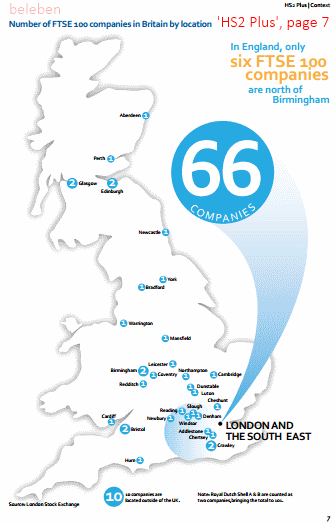 Location of FTSE 100 HQs -Something which David Higgins want to make you think HS2 will change.

Bizarrely, Higgins started off with quoting lots of different problems with the UK rail network which HS2 will do nothing for, apart from relegate the status as priority issues to be solved if HS2 goes ahead, such as journey times from Hull to Leeds or Liverpool to Manchester. All of these, and other issues such as the number of points on existing served to show investment was needed in railways, however he then went on to admit that HS2 wouldn’t solve these problems. One journey time which does have something to do with HS2 that he mentioned was “Birmingham to Manchester is over two hours.”, which is just completely wrong In fact you can do that journey in less than an hour and a half, with even the slow train taking less than two hours. 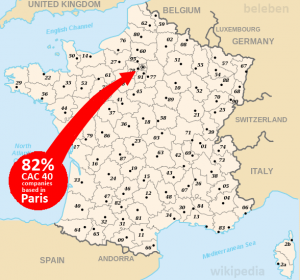 Location of CAC 40 HQs in France – What David Higgins claims is ‘decentralisation’. Image via Beleben

Much of what he said, like the report he published was contradictory and simply not true. As with his report, he made the point that 66% of FTSE 100 companies are based in London, seeming to suggest that HS2 might do something to redress that balance, having the ‘Gaul’ to claim that the TGV has made France less decentralised. The reality is that, using the same yardstick, in France 82% of CAC40 companies are based in Paris. The more important statistic is the number which are based in other cities served by the TGV: Zero.

He also of course made the lazy example of what the TGV has done for Lille. To anyone looking out of the windows as the have to go through passport control in Lille, it looks like the TGV has been a great success for the area, as there has been development around the station, but this hide the fact that unemployment in the wider regions of Nord and Pas de Calais have remained around 3% above the French national average since the arrival of the TGV.

The problem was that he said that he had presented his report to The Cabinet on Tuesday, and it is quite possible that they might have swallowed what he was shovelling.

With reference to his decision to pre-empt the HS2 Phase 2 Consultation, which is not due to report back until the end of the year, Higgins was initially rather non-committal on the fact that HS2 would suck economic activity back down to London, stating that “Crewe doesn’t have to become a dormitory suburb of London”, but when asked at the end about Birmingham just becoming a dormitory suburb of London, he said: “It is absolutely going to happen and that is good. There is a one million shortfall in London housing.” When questions came in at the end, he went even further off-message, saying that HS2 will strengthen the view that we have a London-centric economy. Whilst Higgins was happy to pre-empt the results of the HS2 consultation, he was not so keen on doing the same with the Davies Review, specifically saying that he didn’t mention Heathrow in his ‘HS2 Plus’ report, because people would have noticed that the Davies Review hadn’t happened and no decision on HS2 should be made before that reported.

Although his report delivered no cost savings whatsoever, he admitted his report was meant to be about looking for cost savings, and went on to say we will spend more on Rail Maintenance than HS2 while it is being built, which is is simply not the case, according the DfT figures for Control Period 5. As always with these things, he went with the increase in rail growth, pretending that this was about long distance travel, and wasn’t all to do with short distance commuter journeys. 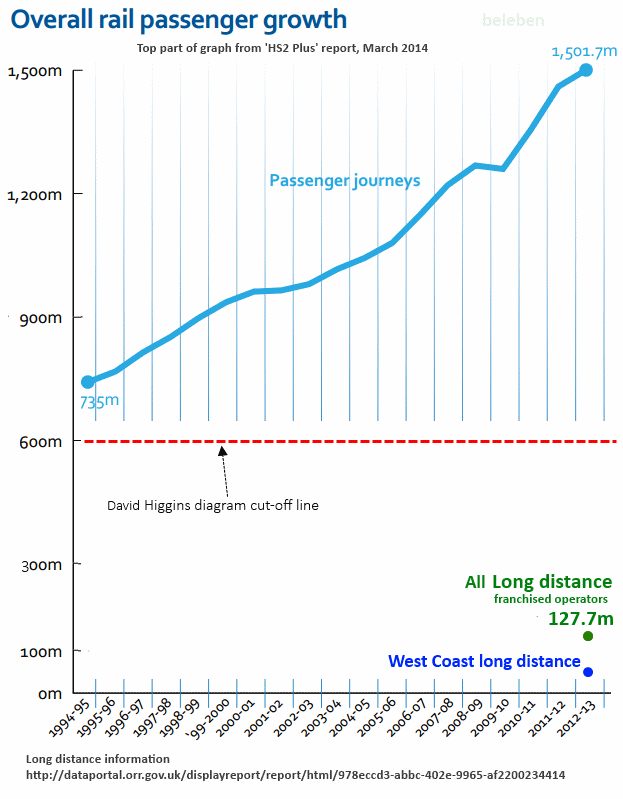 The graph HS2 Ltd like to use about rail growth, with the reality about long-distance journeys added on. Image via Beleben

Other off-message admissions were that: you could argue that anywhere could be disadvantaged by HS2; rail services will have to be diverted away from Euston during the decade of HS2 construction there and he does not know how that will happen; and that he wants to cut down on the legislative (or democratic if you prefer) process saying; “We need to challenge the legislative process, it is just so self-indulgent”. How he wants to speed up the progress of HS2 is by having two bills at the same time, and that he doesn’t think the Hybrid Bill Committee which will hear petitions should have the right to amend the Bill(s).

He said he wanted to get rid of the Handsacre link, which would link HS2 to the West Coast Mainline after Phase 1 is finished, but before Phase 2 is, by having two concurrent Hybrid Bills. This has been billed as making the link from Lichfield to Crewe as part of Phase 1, but more rightly it would mean the Western leg of Phase 2 would be prioritised. He claimed that the ‘temporary’ Handsacre link onto the WCML would create a bottleneck, without mentioning that the permanent ones at Crewe, Wigan and Church Fenton do the same. 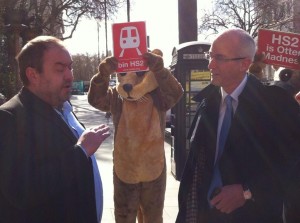 Higgins tries to shovel more bullshit, but we ain’t buying!

Admitting that an underground terminus at New St would be a better choice for a Birmingham HS2 station, but citing the throat going into New St as the problem, which of course could be solved by using land being taken for the HS2 station, he said that the choice of Meadowhall for a Sheffield station was “challenging”, and that it and Toton for Nottingham are “still to be determined”.

After the meeting had ended. I was ‘lucky’ enough to collar Higgins outside, with the assistance of a couple of rather large otters. No they are otters, not lions, honestly! I challenged him about the fact that the idea from his report, that you could reduce costs by eliminating inflation was fraudulent, because the HS2 costs don’t include inflation in the first place and the costs have to go up just to get to 2014 prices. His answer was that will happen and it will happen with Crossrail 2, like that project has already been decided.

Hopefully we will soon be able to publish that footage.