We are in the process of updating our facts page: if the information you want isn’t here, please search the website, using the icon at the top of the page.

High Speed 2 (HS2) is the proposed new high speed railway, planned to be built in England, but funded by taxpayers across the UK. The proposals were made public in 2010, at the very end of the last Labour government, and the first phase is due to open in 2026. But it is over budget and behind schedule. What’s more, opposition to the project is continuing to increase, due to the poor economic case, the dire effects on the environment, and the multiple better ways of spending the money earmarked for HS2.

Over Budget and Behind Schedule

For many years, politicians maintained that HS2 was on schedule and on budget. Skeptics were pointed to the Elizabeth Line (formerly known as Crossrail), which until a few months before it was due to open appeared to be “on time and on budget”.  But in a few short months, this all changed, with billions being added to the Crossrail budget.  What was worse, in the summer of 2018, the opening date was delayed from December 2018 to potentially 2021.

The clearest indication that HS2 is not on time or budget is the delay to Notice to Proceed.

The next major step with HS2 is Notice to Proceed: in the words of HS2 Chair, Allen Cook, to the Transport Select Committee, this means

[HS2 can] “let the contract for the main construction works that need to go on in phase 1. Getting approval for the notice to proceed means that we can let contracts with our main suppliers, to ensure that we deliver the programme against the schedule we are committed to.”

Until notice to Proceed is given, HS2 Ltd cannot start building HS2.

In the same session, the three main tests that HS2 would have to pass were described as “management capability, affordability of contracts and robustness of the revised business case.”

But Notice to Proceed has been delayed several times already Originally due to begin in 2017, construction was subsequently delayed to November 2018, then March 2019, June 2019 and then December 2019.

During his leadership campaign, Boris Johnson promised to set up a review into HS2.  This ‘brief six-week study’ was kicked off in August 2019, and led by former HS2 Ltd chair, Doug Oakervee.  In what was supposed to provide balance, Lord Tony Berkeley, a critic of HS2, was set up as co-chair.  The review period was expected to be quite short, but as of January 2020 there is still no sign of the review itself.

At the start of the Parliamentary term, Transport Secretary Grant Shapps, published the Stocktake document by incoming HS2 Ltd Chair Allen Cook.  This said what had long been predicted by Stop HS2: that both the costs and schedule for HS2 was hopelessly behind.

Although the Oakervee review was originally planned to be short, with publication in the autumn, delays quickly set in, with Grant Shapps telling the Transport Select Committee in October “In terms of timing, we always said autumn which runs up the end of the year. But as budget watchers will recall over the years, autumn can stretch into December.”

Meanwhile Tony Berkeley rescinded his position on the review panel, criticising both the process of the review and the lack of balance in the final report, retaining the right to publish an alternative report. This was published in early January 2020 and concluded that “HS2 is the wrong and expensive solution”, with Berkeley telling reporters that HS2 spending was out of control: more details here

The Times got hold of a leaked copy of Oakervee’s report in November.  According to them. Oakervee says HS2 should go ahead with minor changes, even though is now expected to cost at least £88 billion, and the benefit cost ratio has fallen to potentially gaining £1.30 for every £1 spent.

At the time of writing (January 2020), there is no indication of when the Oakervee review will be published.

By early 2019, all the indications were that HS2 Ltd was struggling to find ways of keeping within the budget envelope of £55.7 (in 2015 terms).

When a new high speed railway was first mooted as an alternative to expanding Heathrow airport, the suggestions were that this would cost about £18billion.  However when the HS2 proposal was firmed up and made public, Phases 1 and 2 were expected to cost £33billion in total, with Phase 1 opening in 2026 and Phase 2 in 2033. By 2013, this had risen to £42 billion, excluding the cost of the trains.  A further review set the funding envelope for delivery of the full HS2 scheme of £55.7bn at 2015 prices.

In an attempt to fend off increasing disquiet about the cost and other aspects of the HS2 proposals, David Cameron asked incoming HS2 Chair, David Higgins to look at ways of reducing costs.  Instead, in his HS2 Plus report, Higgins descoped the project, removing the Heathrow link and connection to HS1, which had been added when the Coalition Government came into office.

Over the next few years, a number of reports were issued questioning whether the cost was likely to be within budget, but Government ministers repeated that they were confident the the project was on budget.  Then the mood music changed with suggestions that HS2 might be having problems with coming in within the budget.  For example, HS2 CEO, Mark Thurston, in an interview with Spencer Stokes for BBC Look North, said

“We’ve always said we’ll really know what it’s going to cost to build High Speed Two once we’ve got all our contractors mobilised, our supply chain mobilised, this is a huge economic project for the country.”

This came soon after short-lived  former Chair of HS2 Ltd, Terry Morgan, told the Lords Economics Affairs Committee in January 2019 that “nobody knows” how much HS2 would cost, and that “something has to give“.

While the expected opening date of 2026 hasn’t changed, each stage of HS2 is behind schedule.  Originally Royal Assent on Phase 1 was due before the end of the Coalition Government in 2015, but was delayed until 2017.  Construction was originally due to begin in 2017, but cannot take place until December 2019 at the earliest. 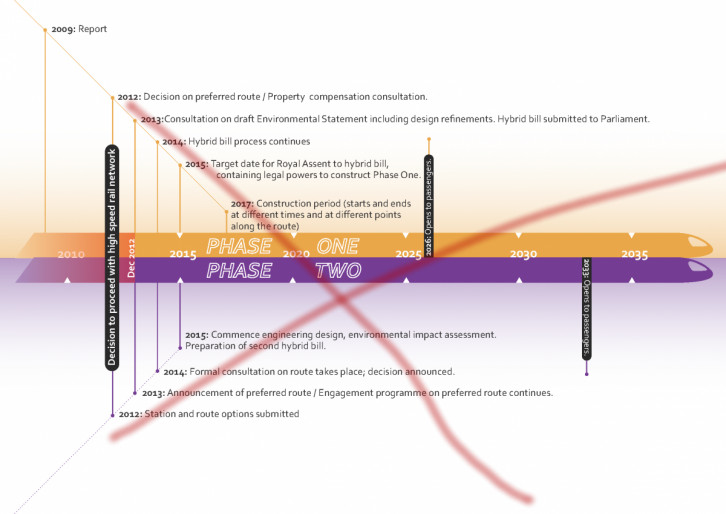 No Environmental Case for HS2

The environmental argument for building HS2 can be summed up by idea that “trains have to be better than cars or planes”.

However the environmental case for HS2 falls down on its own merits: the operation of HS2 will cause increasing carbon emissions, well into the 22nd century, aside from any embedded carbon from building it: there will be negligible modal shift from cars and planes: there will be huge damage to the natural environment, including sensitive wildlife sites: HS2 Ltd’s mitigation efforts are failing.

Even when HS2 was first proposed the carbon case was at best neutral, with the operation of HS2 over decades potentially offsetting the carbon cost of building it.  But it has since got significantly worse.

Regardless of operation, simply building HS2 will cause embedded carbon emissions, which HS2 Ltd estimated in 2019 to be around 1,451,000 tCO2e tonnes

However, as of February 2019, the carbon case massively worsened, with the latest figures from HS2 Ltd showing that after 120 years of operations, HS2 would be increasing carbon emissions rather than reducing them.

One of the original reasons people liked the idea of high speed rail in Britain was the prospect of modal shift from air travel, which might have meant that expansion at airports could be avoided. But HS2 will have almost no modal shift: the majority of passengers will have shifted from conventional speed railways or be using the railway just because it is built.

In response to a Parliamentary question by Cheryl Gillan in 2019, the Dft acknowledged that they were still using modal shift figures from he economic case published in 2013. These show that the modal shift would be

Decisions about the route and connections to other transport systems were not made with the idea of encouraging modal shift. There is no rail link between HS2 and HS1, so the idea of a rail journey Manchester-Paris will not be helped by HS2: and journeys like Leeds to Lille will be more complex using HS2, as it will now involved changing stations in London.

Destruction and Damage to Wildlife Sites

HS2 Ltd has not provided a full list of the wildlife sites that will be directly or indirectly affected by HS2, but it is known to run into many hundreds.

In 2013, an investigation by the Independent on Sunday found that over 350 sites were affected bu Phases 1 and 2: they reported:

“Among the sites that could be directly damaged or indirectly affected are a national nature reserve, 10 county wildlife trust reserves, about 50 ancient woods, 30 river corridors, 24 Sites of Special Scientific Interest (SSSIs, the highest level of protection) and hundreds of other wildlife habitats. Among the rare or scarce species at risk are the small blue butterfly, long-eared owl, stag beetle, great crested newt, purple hairstreak butterfly and Bechstein’s bat.”

This figures are now known to be an underestimate: for example the Woodland Trust say that there are 61 ancient woodland affected on Phase 1 alone.

While there will have been changes to the precise sites affected, due to changes to the route, the true number is much higher, due to a variety of works that are needed to construct the railway.  This will include haul roads to get material to the construction sites, works compounds etc.  Bizarrely, even wildlife mitigation attempts by HS2 are destroying current wildlife sites, with HS2 Ltd destroying a County Wildlife Site to create a “biodiversity zone.

HS2 Ltd’s own figures for the latest phase of the Phase 2b route show it will have a devastating impact on important places for wild plants and animals. 12 highly protected areas for nature conservation known as Sites of Special Scientific Interest, 111 Local Wildlife Sites and 19 ancient woodlands will be seriously damaged.

“HS2 Ltd’s work on this latest phase of the HS2 route is derisory in its assessment of the environmental impact. It is incomplete, there isn’t enough detail, there are significant omissions, it lacks sufficient proposals to compensate for nature’s loss, and to make matters even worse, there’s very little information about the impact on species. On the evidence, we have been given, this phase will result in an unacceptable level of damage to wildlife along the route.”

This criticism was not new for Phase 2b: similar criticisms had been raised for both the Phase 1 and Phase 2a Environmental Statements.

Death to Wildlife and Biodiversity Loss during Operation of HS2

The Independent also reported on effects from the operation of HS2, saying

The toll on individual animals will be great. A Spanish study found that high-speed trains kill about 36 animals per kilometre. If that was applied to both phases of HS2, this would result in some 20,000 mammals, reptiles and amphibians being killed on the line every year.

Specific examples which have come to light since then include 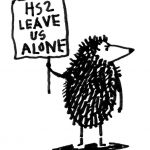 Even where HS2 Ltd has attempted to act to mitigate for wildlife loss, it is failing at these sites as well.  These are just a few examples:

email
No tags for this post.
How you can help
Recent Posts
Browse our archives