In their January 2012 announcement that High Speed Two would be going ahead, the Department for Transport set expectations that HS2 would create a basis for future high speed rail growth.

“High speed rail will bring a wide range of benefits including:

My interpretation of this is that the DfT intends to use elements of HS2 (phases one and two) to enable additional destinations to be served in the future. I would also envisage it means that the frequency of running trains on some routes may be improved if required.

Therefore we need to consider what might be the limiting factors on expansion. There are limits on the number of trains per hour that any line can handle which relate to speed and signalling equipment amongst other factors. The greater the speed, the greater the braking distance required and hence gap between each train. The relationship between speed and braking distance is non linear.

In building an indicative usage schedule, HS2 Ltd have endeavoured to replicate the service patterns currently provided to major cities such as Manchester, Leeds, Newcastle, etc. For phase two, the HS2 schedule envisages 15 trains per hour at peak times between Birmingham Interchange and Euston. In addition there are 2 trains per hour scheduled for Heathrow which share the majority of the track between this station and Birmingham Interchange. So we have now reached 17 trains per hour without including any trains to connect with Europe through HS1. As you will have seen above, this is greater than the UIC maximum recommended capacity for this speed. You may also remember that the track has been designed for use at up to 400 kph which would reduce its capacity (trains per hour) further due to the greater braking distances required. The maximum commercial speed of high speed trains (excluding Maglev) in other countries appears to be 320 kph which is in France.

Let us also look at the potential usage of the connection with HS1. It will use one single track tunnel between Old Oak Common and Primrose Hill, i.e. one track has to be used in both directions. This can carry a maximum of three trains per hour in each direction. This is one factor which will limit growth. The route will then share a length of track with London Overground which is an increasingly popular route. The Mayor of London has already suggested this sharing arrangement is unsuitable and the DfT has been asked to think of a more suitable alternative. So far the DfT has not provided an alternative. Until this conflict is resolved there is another obstacle to expansion. After this the line would have its own route to connect with HS1 north of St Pancras.

So to go back to the original claim that HS2 would provide a foundation for potential future expansion of high speed rail, I fail to see how this can be achieved. It will not be possible to add new destinations (UK or European) or increase service frequencies because there is a bottleneck between Birmingham Interchange and Old Oak Common.

This problem was foreseen five years ago. Atkins (one of the contractors working for HS2 Ltd) produced a report in 2008 entitled “Because Transport Matters”. It looked at possible route layouts for high speed rail in the UK. Its third option called the “Full Network” is virtually identical to HS2 as far north as Leeds and Manchester, and then has a single high speed route to Scotland up the east side of the country rather than the west. The report contained the following comments: “By contrast, the Full Network option is likely to require additional capacity on the southern core section of the route relatively quickly (Figure 2.3). This reiterates the conclusion that a single HSR trunk connection to London is unlikely to provide the necessary capacity” (my italics). 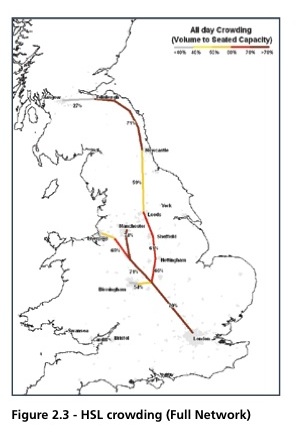 So, how is the HS2 foundation to be expanded in the future? Only to the North of Birmingham? How will the promised direct services to Europe be accommodated?