Yesterday, Tony Berkeley sent a letter to Grant Shapps, with copies to Boris Johnson and Sajid Javid, along with a document listing a whole range of improvements to the rail network which could be done instead of HS2.  These suggestions include previously dropped electrification projects and also makes use of land at Euston and elsewhere for station improvements.

Berkeley points out that the costs of the works proposed are significantly less than HS2 with all the other works needed to make HS2 actually work.

Some highlights from the document:

The review of the case for the High Speed 2 railway creates both the need and the opportunity to consider other ways in which the railway network can contribute to meeting the future economic, social and environmental needs of the nation.

Many now appreciate that HS2 would be an expensive way of meeting only some of these needs, mainly for travel to and from London. It is increasingly understood that improving the connections within and between other cities and regions of the country could help achieve a wider range of policy objectives and give a higher return on investment.

We propose changes which can be made over the next ten years, enabling improvements in train services which will be welcomed publicly and politically, facilitate economic growth, meet societal goals and be environmentally sustainable… We propose a broad programme, from which projects can be advanced as the case for them is confirmed. Over time, the programme will doubtless evolve as priorities and opportunities develop.

…Importantly, the benefits will begin to flow as each proposal is implemented, rather than very high expenditure being followed by a long lead time before any return is earned from a very large project.

The paper looks at other European railways:

A comparison is often made between Britain and France, which has constructed dedicated high-speed lines radiating from Paris to provincial cities spread towards and around the coasts. Many observers consider that, rather than spreading economic growth and political power to the provinces, their effect is to maintain the over-dominant position of Paris in France’s economy and society.

The better example for Britain in the future is Germany, whose major cities are spread throughout the country. There, investment, especially since reunification in 1990, has been applied to connecting the conurbations by a grid of high-quality routes. Some stretches, especially through hilly regions, have been newly-built, others follow older routes but upgrade their capability. All serve the stations at city centres which are the hubs of regional networks: so the cities and towns of each of Germany’s provinces benefit from connection with every other part of the country.

It looks at using the plans and preparations that the HS2 works to date have at Euston and Curzon Street to make improvements to the conventional rail system as well as increasing capacity at other railway terminuses. It also considers ways to improve capacity on the network itself.

For example at Curzon Street it suggests:

Using the Curzon Street site as the hub connecting Inter-City and regional services, rearranging and improving the routes into and out of the city for trains in each type, with separate tracks for high speed, long distance trains and for urban and local services, would multiply the capacity of the West Midlands network. The infrastructure improvements needed would be very substantial, but they would be directed to the needs of everyone in the region, not just long-distance travellers.

The paper proposes an immediate restart of the electrification program.

It also looks at the actual journey time savings for the entire journey using HS2 as part of it, and points out that if you improve local journey times that also has an impact on the potential long distance traveller, in reducing their time getting to the main station to catch an intercity train, as well as for local users getting to local workspaces.

In its conclusion it points out

Our proposals have been compiled in response to a negative: the necessity to consider not building HS2. The assumption that the new very fast line would eventually be built has for a decade conditioned thinking about railway improvements everywhere north of London. 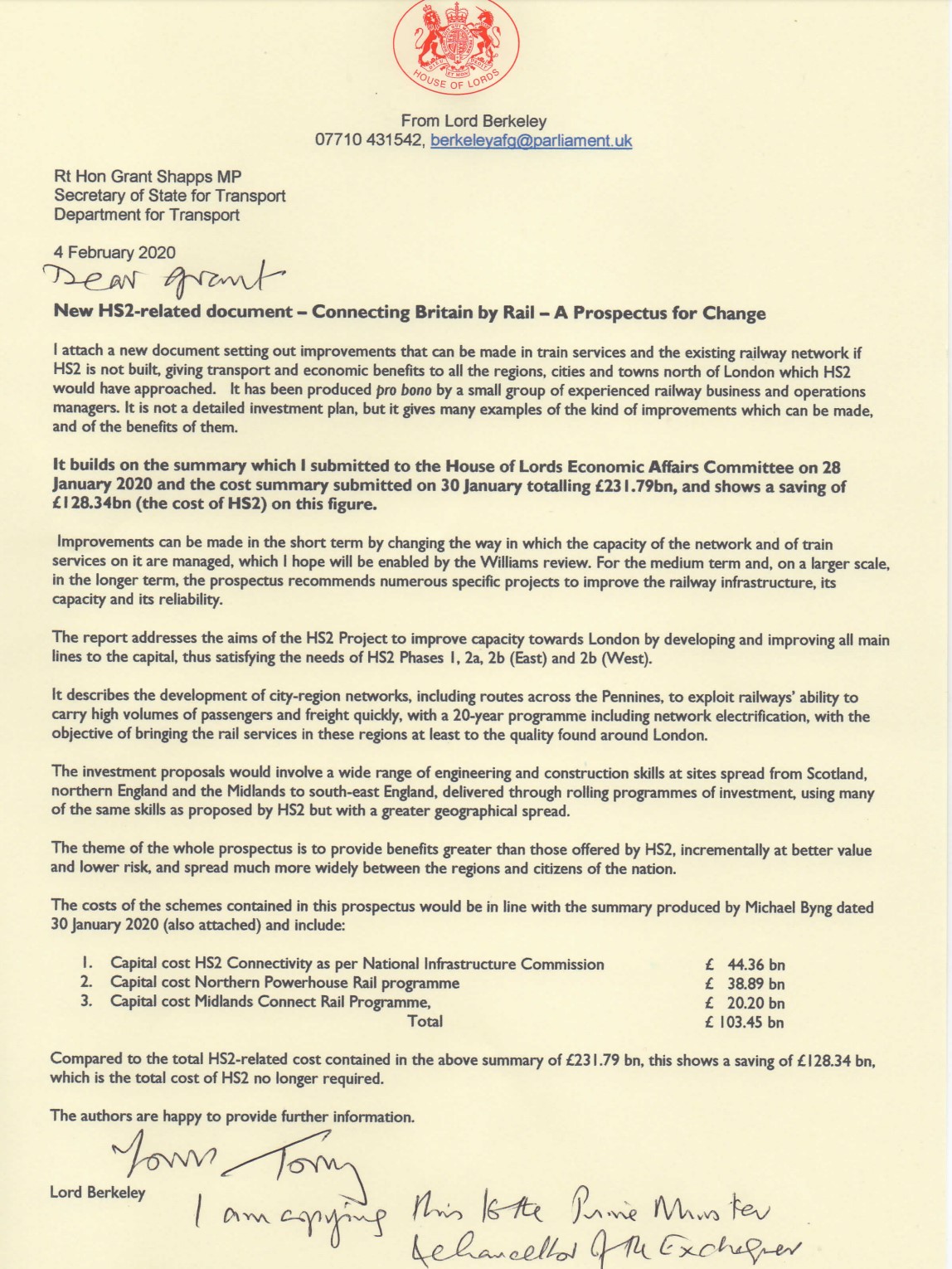 Details of the attached costs can be found here