No doubt on Monday night whoever had leaked the Oakervee to the Times was feeling pretty pleased with themselves: a chance for glowing coverage of HS2 on Tuesday during the election period, with expectation of more glowing coverage later.

Except it was not to be. By lunchtime, the Guardian was reporting that the co-chair, Tony Berkeley, had demanded that his name was removed from the report. By the evening the news was as much about Berkeley’s refusal to be associated with Oakervee’s report as it was about the report itself.

My HS2 letter to Doug Oakervee on the Review panel. pic.twitter.com/7xR9GDYFhA

The letter highlights a number of problems, both with HS2 itself and also with the conduct of the review, with Berkeley saying

“I cannot support its conclusions or recommendations, and have serious problems with its lack of balance.”

Berkeley writes
‘As Deputy Chair I would have expected to be able to attend the meetings that you had with ministers, officials and HS2 from non-execs downward, but I was not invited. There was also a marked reluctance from officials and/or you to delve more deeply into the costs of the project, with long delays in arranging meetings with HS2, something I asked for in my first week on the Review.’

Much of the letter focuses on costs. Berkeley says that the former Secretary of State for Transport, Patrick McLoughlin writing to George Osborne in May 2016, “sought to persuade the Treasury” that the budget was under control, whilst HS2 Ltd internal memos showed serious concerns about the budget, and that within Hs2 Ltd a figure of at least £84-86bn was accepted bu Autumn/Winter 2016. Berkeley adds that at a conference at the time”attended by officials from |HM Treasury, the Department for Transport and HS2 directors, there was discussion that the ultimate costs … could be as high as £100 bn”.

Berkeley later says that while Michael Byng was willing to sign an NDA by 17th September, “officials prevented this”, meaning there was “no proper comparison between the estimates of HS2 and Michael Byng”. Berkeley notes his “surprise that HS2 Ltd did not appear to have a structured estimate for external scrutiny”.

But even with 18 trains an hour in each direction, and taking into account other benefits, Berkeley says the report gives a BCR of 1.1 to 1.8. What is key though is that dropping the number of trains per hour reduces costs a little, but benefits by a lot: with 16tph, the costs reduce by 6%, but the benefits by 24% 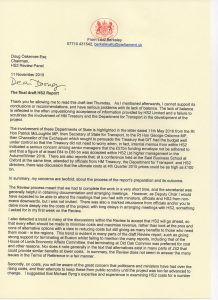 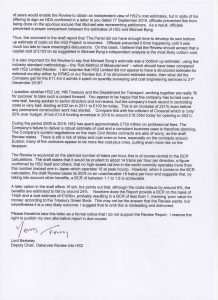