Every month, Conservative Home polls members of the Conservative party on their views on various topics, including the popularity (or otherwise) of Cabinet ministers.

With the most recent results, there’s a very striking result: ex-Secretaries of State for Transport languish in the three bottom places of the table, with the current one in 23nd place out of 28.

Patrick McLoughlin, now Party Chairman, is 28th out of 28, with a net approval rating of -29.7, putting him firmly in the “disapproved of” category. Philip Hammond is slightly better off in 27th position, with Justine Greening in 26th at -5.7. Chris Grayling beats Theresa May and Liz Truss into a high of 23rd place. 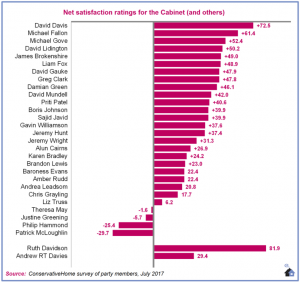 Last month showed a similar picture for Philip Hammond and Patrick McLoughlin, in positions 26th and 28th, although the results cannot be directly compared, as the survey method has changed. But even then both Chris Grayling and Justine Greening were in the bottom half of the table.

Whatever the cause of the Ministers’ unpopularity, its clear that Conservative Home readers do not rate HS2. In May, HS2 came bottom of the table of potential policies in the Conservative manifesto, when the readership were surveyed.