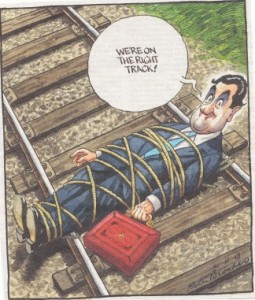 One of the big issues with HS2 is the dog’s breakfast of the current plans for Euston.  There is going to be, according to the proposals, 17 years of rebuilding associated with HS2, whilst Phase 1 and 2 are built.  Only after that the existing conventional station might get its turn.

Meanwhile the  new editor of the London Evening Standard is George Osborne, MP, former chancellor and driving force behind HS2.

Osborne has claimed the Standard’s

“only interest will be to give a voice to all Londoners. We will be fearless as a paper fighting for their interests. We will judge what the government, London’s politicians and the political parties do against this simple test: is it good for our readers and good for London? If it is, we’ll support them. If it isn’t, we’ll be quick to say so.”

With HS2 on track to cause so much disruption to Londoners and commuters who use Euston, will the Standard now really give any problems there the coverage that would be expected of it?

email
Tags: News
News
2 comments to “Who will report on Euston problems?”