A Freedom of Information Request has revealed that HS2 Ltd has so far made £9.1m out of 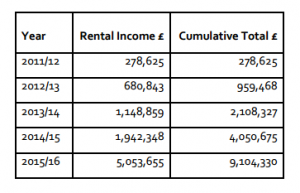 renting properties which it has bought, with £5m f that figure coming in the last year. Of 400 homes which they have bought, 363 are currently being rented out. It is not known however how many of these are being rented back to the original owners, but it is expected that these make up the majority of the increase seen this year.

Although it has to be taken as a positive that the company is renting out homes instead of leaving them boarded up, the reality is that many will be occupied by people who have lived there for years, preparing for their last Christmas in their family home, as they have now finally sold up, wishing to get out before construction on Phase 1 starts.

Joe Rukin, campaign manager for Stop HS2, said: “We know from long experience that HS2 has significantly undervalued property, with a policy of using valuers who are not from the local area. The same properties are then leased out for a nice profit.”