On 10th August, the new members of the HS2 Select Committee appeared in the Chilterns, on a fact finding mission… or at least that was the idea. 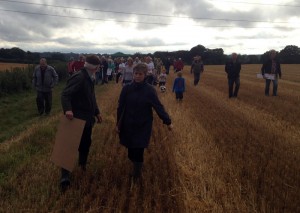 Geoffrey Clifton-Brown, allegedly no stranger to things “country”, ventured out from the Cotswolds, together with Bolton’s David Crausby and Preston’s Mark Hendrick. Their purpose, to take a gander at the bit of Bucks that stands in the way of progress.

Oh but the countryside took them completely by surprise, the roads were so… well… rural! It took ages to get from one bit to the next. Meaning that half way through the trip, almost all of the allotted time had been used up.

Thus began the game of “Hyde and Seek”, whereby the protesters, some of whom were both frail and elderly, would hike in the rain across fields of stubble behind South Heath’s Bury Farm, to wait to be found. Meanwhile, the coach-full of “great and good” sped past the farm gates, deciding to take a whirlwind tour of somewhere else entirely.

“They went that-a-way”, a motorist shouted from a banner bedecked Range Rover as it passed a bored, slightly damp looking group, gathered in Kings Lane. Inspired, some rushed to their vehicles and took off towards Hyde End, somebody had mentioned Chappel Farm. Others refused to be enticed by the range Rover’s dust trail and made off in the opposite direction, for “when they come back”, if ever they would, no doubt hoping they might go back to Bury Farm after all.

Only the faithful remained at their station, confident that an MP’s word was his bond… daft beggars!

Having visited Hyde End, an adventure so rapid that it could well have been described as little more than a handbrake turn. The coach pulled up next to the now depleted group that had brassed it out at Kings Lane. Had their confidence been rewarded? Not so, for nobody moved from his seat on the coach. They had only stopped because the remaining three people looked so inoffensive.

I decided it was up to me to explain that over a hundred people had been strewn across two miles of farmland hoping to talk to them and yet they seemed to have no intention of actually listening to anyone. Geoffrey Clifton-Brown shifted uncomfortably in his seat.

“Where exactly are you going to stop?” I asked.

“We ran out of time”, explained the chap behind the driver.

“Time?” I was incensed, “you talk to me about time?” I felt my blood rising, “we understand a great deal about time, because this damned train of yours is going to turn our countryside upside down for years!”

Further down the road, a small crowd stopped the coach at the crossroads, the driver kept the engine running… like a get-away car outside a bank.

Its passengers remained in their seats until it managed to escape. They might not have learnt a great deal about The Chilterns during their visit, but I doubt they will forget it very easily.