A report published today by Transport Focus in conjunction with HS2 Ltd has come up with several suggestions for the final operation of HS2, many of which show a complete detachment from reality. Members of the 40 strong focus group were chosen specifically because they had no knowledge of HS2 and were told to ‘disregard practicality’ when coming up with their ideas, which may well explain many of the outlandish and extravagant suggestions.

One of the most reported suggestions from this report is to have gyms on HS2 trains, despite the fact it would seem there would be an inherent danger in using any piece of gym equipment on a train moving in excess of 200mph. Other suggestions which would surely eat into the number of seats on a train which we are told is needed for capacity reasons include; food which you can see being cooked, a waiter service, a GP surgery and pharmacy, shops, offices for business travellers, and family compartments. 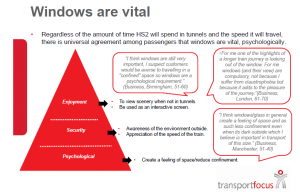 The focus group came up with the concept that windows on trains are vital. No really, this is serious. How much did HS2 Ltd pay for this crap?

In what is surely a forlorn hope, the focus group suggested that HS2 should be made affordable, with one suggestion being to have standing carriages, which again seems rather impractical at 225mph. Supposedly innovative suggestions were to have porters for baggage, different classes of carriages, and seats which could face the way the train is going, an ‘innovation’ which was standard on trams 100 years ago. Potentially the least surprising demand from passengers in this ilk was that ‘windows are vital’, so it is recommended that these should be a standard feature on HS2 trains.

To highlight the fact the members of the focus group didn’t know anything about HS2, one of the suggestions was that passengers should not have to walk more than a minute to connecting trains, despite that the Leeds, East Midlands and both Birmingham stations will be new builds requiring passengers to get to another station to continue their journeys.

“The suggestions being made, that HS2 trains could have gyms, surgeries, shops and glass panelled kitchens with waiter service are absolutely bonkers. When you read that the report concludes that ‘windows are vital’ for HS2 trains, you have to ask how much money did this rubbish cost? As we have always suspected, it seems HS2 is being designed to be like 1st class on the Titanic, whilst everyone who can’t afford to use it is crammed into the steerage compartments of the rest of the rail network. Now it has been confirmed that the Government are looking at cutting back current rail upgrade projects due to rising costs, it is inconceivable that they continue to chuck money at this vanity project which will only benefit the richest in society.”

“What’s clear from the report and the associated documents was that many of the changes people want to see from a brand new railway have already been designed out of HS2.  These include looking at the journey as a whole, but HS2 Ltd only ever seem to consider the HS2 part of any journey.  With the HS1 link and the spur to Heathrow both dropped, many obvious connections will be difficult and time-consuming.”

“Today, 23rd June is National Woman in Engineering Day. I am not overly surprised to see HS2 Ltd trying to get in on the act and promote HS2 through events organised as part of National Woman in Engineering Day.  But what they do is far more important than what they say.  HS2 Ltd pay their current male CEO a salary six times as much as the woman CEO he replaced.  That gives a very clear message about their values.”