This was originally published on South Heath against HS2.

A report by the International Monetary Fund casts doubt on the ability of any major party to be able to balance the books in the next Parliament. 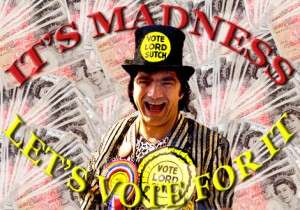 The prediction, the latest in its twice-yearly Fiscal Monitor reports, declared that it “expected falling tax revenues in the next Parliament” to be “deeper than those predicted by the UK’s independent Office for Budget Responsibility (OBR)”.

The fund, which promotes financial stability and can act as a lender of last resort to its 188-member nations, is seen by some as an important and impartial indicator of the strength of a nation’s economy. However, some people are significantly less convinced.

Not a good time surely to be planning a major tax-payer funded construction project like HS2? Aha! Not so fast… the IMF suggested that there was a need toincrease public spending!

Jeremy Warner (Business & Economics expert at The Telegraph) once suggested that, the IMF is quite reliable contrary indicator. Suggesting that when it is upbeat, you can be sure that disaster is just around the corner, and when downbeat, things are about to look up.

Of one thing one can be pretty certain, whether Chancellor or pleb, you cannot borrow your way out of debt. If splurging out on infrastructure was the cure for economic stagnation, then France would be outpacing everyone… but it ain’t!

When finally we have the nation’s decision on who is to govern us for the next five years, we know that there are going to be significant cuts in government spending in key areas. That’s the problem with governments, they are prone to splash the cash on big headline grabbing projects and deprive major services of the money they need just to keep providing basic services.

The election day is almost upon us and most people agree that it is an almost impossible job to find a party worth voting for.

Where is Screaming Lord Sutch when you need him?