This was originally published on South Heath Against HS2.

The 2014 National Rail Passenger Satisfaction Survey results are now in and they will make uncomfortable reading for everyone “hell bent” on creating high speed rail chaos throughout the country.

Released by Passenger Focus the survey reports that just 2% of Virgin Rail Business (long distance) passengers consider the train speed to be inadequate. As has often been stated by campaigners against HS2, speed was never that much of an issue, in fact many more people indicated that they were interested in how clean the carriages are. No great surprise there for most of us, but probably delivered a bit of a shock in the Westminster bubble.

Considering that these respondents, who are mostly West Coast Main Line users, are the nearest we can get to being typical of the claimed HS2 prospective users, the evidence gives the lie to the supposed need for a straight, rapid rail link whichever way you try to spin it. 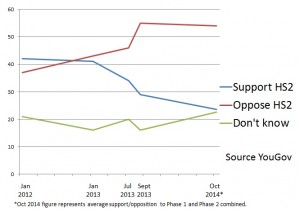 The latest YouGov poll is proof that despite a continuous stream of press statements emitting from HS2 Limited and “friendlies” in government, the public remain steadfastly cynical about the need for the project. In fact only apathy appears to be the winner, which might give government at least a little to cheer about.

Not a very good reason to be cheerful and a poor return for all the effort used in trying to hype “part three” (HS3), the so called “engine for Northern growth” that Osborne keeps plugging.

With the election looming in May 2015 Cameron, Osborne and Co. have almost certainly welcomed the recent lull in opposition to HS2, especially as UKIP are biting at their ankles. Well Dave, even we activists need a bit of a recess… but the holiday is over and it’s time to get going again in time for your big vote!

email
Tags: News
News
One comment to “High Speed Rail – No Reason To Be Cheerful Over Part Three!”