Yesterday [16th September] the HS2 Hybrid Bill Committee, who have the task of hearing 1,900 petitions from people and organisations wanting changes to the HS2 proposal, had their second tour of the HS2 route. In all, the visit went well, with there being members of the public waiting for the committee at all the destinations and the committee members willing to talk and listen. 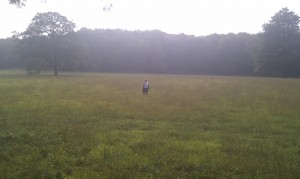 “I remember when this was all just fields” – HS2 Bill Committee member Ian Mearns walks along the route of HS2 in Hints.

Given that HS2 is all about speed, you’d have thought that getting people between the stations would be the priority for HS2. Well, no. Instead of having the people mover actually stop at the existing station, the plan for reasons best known to HS2 Ltd is to have two stops either side of it. Oddly enough the petition is to just have the one stop, actually at the station, which will most likely be one of the easiest decisions the Committee have to make. 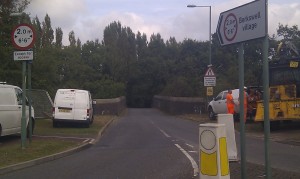 The Bus Driver decided not to chance going over the Lavender Hall Lane Bridge.

There was a very different story at the next train station, Berkswell, where residents of Balsall Common were handily able to point out just how high HS2 would have to be to cross the West Coast Mainline at that point, and that despite what HS2 Ltd were trying to make out, it would take some distance for the line to drop back to ground level. That sort of set the tone, whereby members of the community didn’t exactly agree with what HS2 Ltd were saying about the degree of impact HS2 would bring.

While HS2 Ltd had been told that their original plan for the visit to go past Berkswell station wouldn’t be possible because the bridge clearance was only 7 feet, they hadn’t shared the actual route they would be using, so things then quickly started to go wrong. 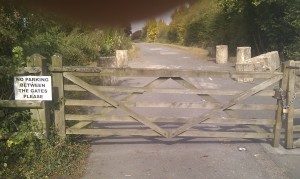 Getting a little bit lost meant meant the tour didn’t have to get to this gate only to turn around.

Mirroring the original design of HS2, the route for the tour had clearly been drawn up by someone in London looking at a map, without any clue what the area was actually like, with the there being three parts of the planned route which were impossible. Firstly, HS2 had planned to go across the Lavender Hall Lane Bridge outside Berkswell, but there is a 6’6” width limit on that road. Because of that, the bus ended up getting to Hampton in Arden the long way, via Berkswell and Meriden, so never getting to the second impossible part of the route, the twice gated Marsh Lane. After Hampton in Arden, the plan had been to go via Pasture Farm right up until seeing the sign that said ‘Private Driveway, No Through Road’. 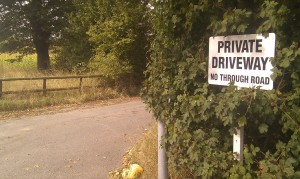 Nope, not going that way either!

It would take forever to detail what happened at all of the stops, save to say that the committee stayed longer than planned in the majority of locations and even made a couple of unscheduled stops. One stop, Middle Bickenhill Lane, was dropped due to the fact that Park Farm gave a much better impression of the proposed Birmingham International site, whilst members of the public were unfortunately left waiting at Fradley Junction, due to the original programme saying the committee would be there, with the final version adding the word ‘near’, without specifying where.

There was of course a common thread going through what communities were saying to the committee, that HS2 Ltd hadn’t really engaged with them. There were many horror stories, but the most laughable was at Packington Moor Farm, where HS2 plan to knock down all the buildings except the farmhouse, and the mitigation suggested for this from HS2 Ltd is a hedge! 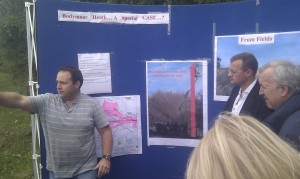 The HS2 Committee make an unscheduled stop to meet residents of Bodymoor Heath.

As the committee got further North, an unexpected pattern started to emerge. It became clear that after years of not listening or engaging with people, basically ignoring their proposals, that HS2 Ltd have had a flurry of activity trying to get deals done with landowners, just before they are due to appear as petitioners in front of the committee.

In the words of one such petitioner: “I’m glad that they are now listening to what we’ve been saying for years, but they have caused two years of unnecessary stress and heartache. One of my neighbours had a nervous breakdown which might not have happened with a different attitude from HS2 Ltd.”

The next set of visits will be on 7th-8th October, starting near Burton Green and finishing somewhere in South Northamptonshire. Details for the itineraries are currently being suggested.

email
Tags: News
News
3 comments to “A grand day out with the HS2 Committee”