We’ve been following up about Professor Woodward’s research on Rayleigh Waves and what HS2 are doing about it. (Rayleigh waves are a type of wave in solids.)

The reason that Rayleigh Waves cause problems in some places at certain train speeds, but no problems in other places at the same speed, is to because of the properties of the ground the trains are running on.

Prof Woodward gave the example, in his inaugeral lecture (slides can be downloaded from here) of the railway between Goteberg and Malmo, where Rayleigh Waves have been observed, when the speed of the train was only 200kph. This is the same speed as our West Coast Main Line, which does not have problems with Rayleigh Waves.

In the funding application for Prof Woodward’s research it says “Introduction of high-speed systems to the railway network across the world has however brought new problems in terms of railway geotechnics, namely the significant amplification of train-track vibrations at high train speeds.”

We got in touch with Heriot-Watt University to ask questions about the funding of Prof Woodward’s research.

A spokeswoman for Heriot-Watt University said, “Professor Woodward is an internationally recognised expert in civil and railway engineering. As part of his long-term research in the field he is currently undertaking an EPSRC (Engineering and Physical Science Research Council, a non-departmental public body of the Department for Business Innovation and Skills) funded project into the design of high speed railway tracks and the modelling, prediction and stabilising of the effects of such systems.

“This is a three year project, run jointly with The University of Edinburgh, which started in 2010. The overall funding figure was £467,000, of which Heriot Watt received £330,424. 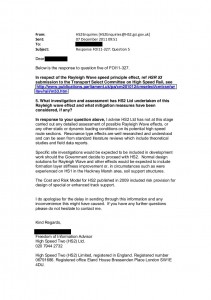 “As the research is not yet complete it is not possible to answer specific details on the research at this stage. Detailed results will be published on completion.”

(She said details of the project can be found at: http://gow.epsrc.ac.uk/NGBOViewGrant.aspx?GrantRef=EP/H027262/1. )

Clearly this is not research for HS2 Ltd as part of the HS2 project. A FOI request in December got the repsonse: “HS2 Ltd has not at this stage carried out any detailed assessment of possible Rayleigh Wave effects, or any other static or dynamic loading conditions on its potential high speed route sections.”

HS2 Ltd have since said “We’re designing #HS2 so that there’s no possibility Rayleigh Waves wld lead to problems like derailment. It’s nonsense to suggest otherwise”

Finally, David Liddington MP for Aylesbury is also following up with a letter to Justine Greening.