The briefing note published today to accompany the Queens Speech confirms that the Government is still considering whether or not to proceed with HS2. Page 102 of the document states:

“The Government awaits the review, of the High Speed Two (HS2) network led by Doug Oakervee which is looking at whether and how to proceed with HS2, including the benefits and impacts; affordability and efficiency; deliverability; and scope and phasing, including its relationship with Northern Powerhouse Rail.”

The document goes on to state that if the Government decides to proceed with HS2 following the publication of the Oakervee Review, then the Bill for Phase 2a of the project from the West Midlands to Crewe, which reached committee stage in the House of Lords in the previous parliament, would be revived. This is the bare minimum reference to HS2 the Government could make, any less would surely mean a decision had already been made to cancel the project.

The conscious decision to continue equivocating over the future of HS2 following such a resounding election win for the Conservatives only fuels speculation that the project is due to be cancelled or significantly downgraded. Whilst a draft version of the Oakervee Review leaked during the election campaign suggested that the report would back the project, vice-chair of the review Lord Berkeley immediately distanced himself from it, described omissions from the findings as “misleading and dishonest”, and stated he would produce his own independent report on the status of the project, after previously having said the project was “rampant with fraud”.

It now seems unlikely that a decision will be made on HS2 until the UK formally leaves the EU on 31st January.

“Given the size of the majority the Conservatives now have, you would have thought that if they were all for HS2 they would have released the Oakervee report and fully committed to it today. The fact that Government are still saying they are looking about whether and how to proceed with HS2 shows very clearly that the whole thing is in deep trouble, and that this month will determine the future of the entire project. The Government must now ignore the temptation to whitewash the absolute mess that is HS2, take the independent evidence that shows it is a waste of money that will fail to achieve its stated objectives seriously, and cancel it before any more damage is done.”

“To sneak a decision to go ahead with HS2 in the Queen’s speech would be to break a commitment from the manifesto, which was to decide what to do about high speed rail in conjunction with Northern and Midlands leaders following the outcome of the Oakervee review.”

“A priority for Boris Johnson’s government is surely to regain the publics trust in politics and politicians.  Having spent the election telling people they hadn’t decided about HS2, they hadn’t seen the Oakervee review, to turn round and decide that actually they would go ahead with it within a week of being elected would be a massive breach of trust for ordinary people.”

“It’s very easy to skip over major parts of briefing documents to find the specific sets of words to back up your desired position.  But when you look at the whole document, including the executive summary, there are barely any mention of HS2 and no sign of any enthusiasm.” 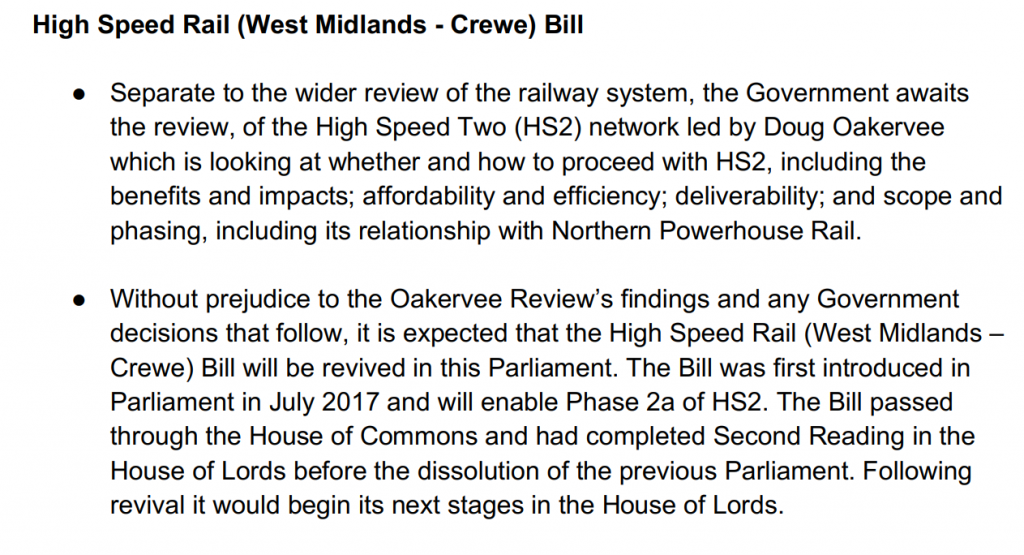