Today, the NAO has produced a report looking into major projects. Their conclusion, that a third of them could fail in the next three years is scathing. Obviously, the report based on the work of the Major Projects Authority (now the Infrastructure and Projects Authority) doesn’t say which projects are rated red or amber-red as the Governments ‘Transparency Agenda’ won’t allow that to become public this soon, but given that HS2 has regularly been rated ‘amber-red’, there’s no prizes for guessing that it’s one of those where “Successful delivery was in doubt or unachievable unless urgent action is taken”. 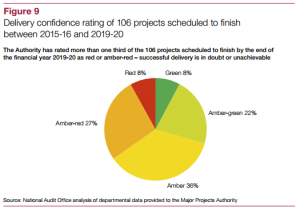 Given that the assessment that ‘urgent action’ is required has been awarded to HS2 for over three years, it’s no surprise that The Financial Times and The Telegraph heavily speculated that HS2 was again in this bracket. Indeed, HS2 was one of the very few projects mentioned by name by the NAO with one section of their report stating:

“High Speed 2 and Universal Credit had been slow to respond to review recommendations in their early stages.”

“Programmes such as High Speed 2 are complex. They have multiple elements to be delivered in parallel by a diverse supply chain; many external interdependencies; and multiple policy objectives, such as transport objectives that involve increasing capacity in the railway, and economic objectives that involve generating growth and rebalancing the economy. These require governance structures that span traditional departmental boundaries.”

Whilst the NAO report relates to the MPA reports from June 2015, further ones will have taken place in November, but the Government still refuses to publish details of the reports from the November 2014 report. Whilst the Information  Commissioner ordered publication of this report, which HS2 Ltd Chair Sir David Higgins admitted had raised 75 ‘complex issues’, the Government have fought publication, and a first tier tribunal is now set for April, whilst the refused request for the June 2015 report is currently with the Information Commissioner.