As you might expect, HS2 is not the biggest issue for debate at the moment in the ongoing campaign within the Conservative Party, however it has been commented on by two of the candidates.

“Is [HS2] really the best way to use any funding available for transport infrastructure? I personally favour more investment in the regions to enable hub airports to flourish. Not all journeys begin and end in London and we must ask if it is worth such a huge investment to trim merely minutes from London travel times.”

However, given that Dr Fox decided to vote for HS2 even after he had relieved himself of the requirement to follow the party line by quitting Government following a lobbying scandal, this ‘commitment’ seems rather hollow. As he is sitting last in the current polls among Conservative MPs, this seems more like a desperate last minute attempt to secure the votes of undeclared on-route MPs such as Victoria Prentis, Cheryl Gillan, Chris Pincher, Jeremy Lefroy, David Mowat, Fiona Bruce and Graham Brady. Though of course now Boris Johnson has come out for Andrea Leadsom, this may change things. 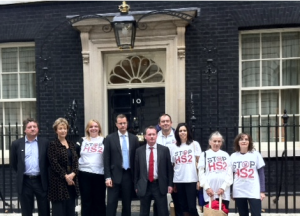 Leadsom has been a long-time critic of HS2, with the front page of The Telegraph reporting she would fight the project, after she became a Minister just before the second reading vote. Last week, she told LBC that she would commence an ‘early review’ of the project, with a not so veiled threat that it would be on the way out in favour of transport spending in the North of England.

At the start of the Stop HS2 campaign, Mrs Leadsom was one of a handful of MPs who was completely on side, and for the first four years of the campaign was the most helpful MP we had, helping take our argument directly into Parliament by organising the Parliamentary side of our early lobby days.

The noticeable thing was that right from the start, whilst alerted to HS2 by constituency concerns, her strong opposition to HS2 was based on an early understanding of the business case. This video is from our second lobby day in November 2011.

The only other mention of HS2 during the Tory leadership campaign so far which we have been able to spot so far was when Transport Secretary Patrick McLoughlin was interviewed by BBC Derby. For reasons best known to himself, he decided it was worth while telling them that Theresa May has always been a strong supporter of HS2.

A quick look at the voting records shows that the only one of the five contenders to be the next Prime Minister who hasn’t voted for HS2 in the past is, as you might expect, Andrea Leasom.