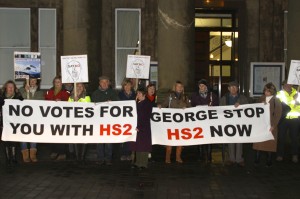 George Osborne used Police Decoys to avoid meeting 20 of his Constituents who were waiting to speak to him after a “closed meeting” he had been attending at Macclesfield Town Hall – not in his Tatton Constituency by the way.

His Constituents, from areas of his Tatton Constituency that will be badly affected by HS2, had been trying to meet with him at Surgeries, which the Politicians hold within their constituencies, so that constituents can meet a Member of Parliament “face to face” to air their views and grievances. But not George !

His PA told us that he was “too busy” to hold surgeries – despite what it says on his website – but that he could respond to letters ! Nice of him ! Yet on the subject of HS2 – no way would he meet face to face with voters.

Instead he invited Parish Councillors from those Parishes within Tatton to have an “audience” with him where he would answer voters questions previously submitted in writing! No Voters allowed in his presence.

Originally this meeting was to be held in Plumley Village Hall, but at the last minute the venue was secretly changed to Macclesfield Town Hall, supposedly on “Security Grounds”.

Fortunately we saw a copy of the “secret e-mail” and turned up at Macclesfield Town Hall, twenty of us in total. BBC TV was present as well. Sadly we didn’t spot him arriving and we only saw the Decoy Vehicle leaving, despite covering as many exits as possible. 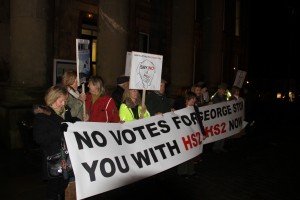 We thought this was to be George on his own, but NO – HS2 Ltd people were there too. In other words an HS2 Ltd presentation as well. No opposing views or challenges allowed.

George must surely realize that by continuing to avoid his constituents, that a groundswell of opposition is building up, such that Fringe Parties that oppose HS2 are gaining a great deal of support. If he and his advisers thing that his majority of just under 15,000 makes Tatton a safe seat, he should think again. A previous Conservative MP thought so and lost out. HS2 is fast becoming the “Tatton Brown Envelope”