Today at the Transport Select Committee, Lewis Atter of KMPG, the company which was paid almost a quarter of a million pounds to produce a widely-criticised report which relied on untested methodologies to claim HS2 would be worth £15bn/year to the UK economy, admitted that their analysis did not assume any increase in employment, and relied on the idea that business and people would move as a result of HS2. 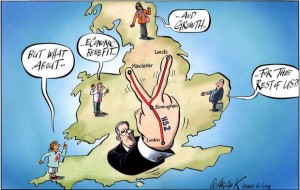 There was criticism of the report from MPs, with Jason McCartney pointing out that it was outdated as soon as it was published and Adrian Sanders pointing out that it was not possible to define the areas which are shown to be losers under the KPMG report, as they were simply represented as ‘red blobs’. This was reiterated by Jim Fitzpatrick, who asked why the regions losing out were less prominent. Sanders also said that “The areas with highest fares and slowest services now to lose out even more because of HS2.”

Following KPMG, Transport Secretary Patrick McLoughlin and David Prout faced the committee. McLoughlin boasted that there was “Huge interest in the HS2 supply chain.”, which given that every design contractor has gone over budget and been paid, is hardly a surprise.

“By their own admission, KPMG have proved that their own report on HS2 is nothing but smoke and mirrors. How can it be possible to say that anything could possibly be worth £15bn to the economy with the underlying premise that no new jobs are created after it is built? Mr Atter was very clear that the KPMG analysis just expected people and businesses to move around the country as a result of HS2, and this just proves what we have always been saying , that places with stations may win, but at the cost of the majority of the country, which will not be served by HS2 becoming economic deserts. Even when the Government chuck money at spin in an attempt to prop up their case for HS2, it backfires and they ends up proving how much of an idiotic idea it is.”

“It has already been admitted that the KPMG report did not have a statistical foundation, and today it was admitted that it was out of date as soon as it was published. The KPMG representatives said they expected further analyses to show even more benefits, akin to admitting that their last work of fiction hasn’t fooled anyone, but if they get another massive slab of taxpayers cash they’ll give spinning the case for HS2 another go.”

“The case for HS2 is based on the idea that digital technologies change nothing, but Patrick McLoughlin completely missed the irony in boasting to the committee that HS2 is the first time a bill has been put on a memory stick. How can he possibly say that and that digital technology changes nothing, when it is changing everything? Three years ago ARUP, one of the main contractors for HS2 told their staff not to travel for meetings, but use video conferencing instead. Other Government departments recognise that business are reducing business travel and are planning around that, but HS2 have changed their plans to increase the number of business passengers forecast on HS2 to make their discredited business plan work.”

“One MP on the committee tried to point out that people said 180 years ago that we didn’t need railways and the canals could cope, but what he didn’t seem to realise is advocating HS2 against a real 21st century solution is akin to advocating canals over railways back then. Anyone who says HS2 is needed for our children has clearly not paid attention to how much digital technology is influencing children now, and how it will influence their working patterns in the future.”

email
Tags: News
News
4 comments to “KPMG admit HS2 does not create jobs, but move them.”