We had a constant flow of people arriving, speaking, giving interviews and going to meetings. We’ve seen that it’s been reported that there were 500+ people there, which is a very good number, especially as we weren’t all outside at the same time.

During the main demonstration, the Stop HS2 white elephant was up, and attracted plenty of attractions, along with some otters, who were there to show the ‘utter madness of HS2’.  There were a wide variety of speakers, including Cheryl Gillan, Paul Nuttall, Joe Rukin, Penny Gaines, Trevor Forrester,Andrew Mason, Deanne DuKhan, Don Hitchcock, Andrew Mason, Keri Brennan, Archie Taylor, and Richard Lloyd.

In the afternoon, the main speaking event inside the House of Parliament was crammed full, with numerous people being unable to get in to hear from the speakers.  The speakers at the two events included Bill Cash, Jeremy Lefroy, Andrew Bridgen, Kelvin Hopkins, Barry Sheerman, Andrea Leadsom, Dan Byles, Philip Lund, Robert Oxley, with Joe Rukin chairing.

The overflow room, originally booked for meetings with MPs turned into an impromptu discussion with many people listening to David Lidington’s researcher trying to defend the position of government ministers.

The speaking event was repeated, with some people coming to both sessions.

If you’ve got any photos, or recordings of the day, please let us know at info@stophs2.org. 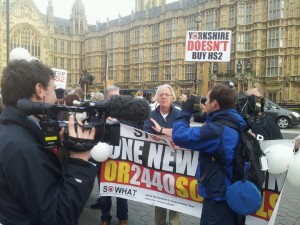 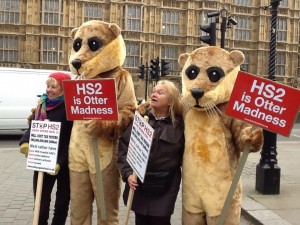 email
Tags: News
News
7 comments to “Stop HS2 at the Houses of Parliament”