The Welsh Assembly finance minister Jane Hutt has confirmed the Welsh Government has been given £84m via the Barnett Formula, which is used to allocate devolved administrations a share of central Government spending, as a direct result of spending which has already taken place on HS2. In a letter to the Assembly finance committee she wrote: 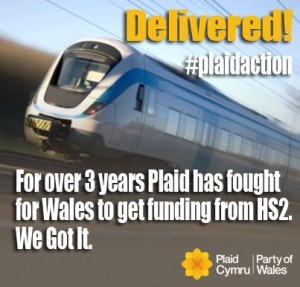 While Plaid Cymru have been arguing for Barnett funding for a while, the Labour led Welsh Government only changed their position to lobby for this in September. At that time, the Department for Transport was adamant that Wales would not qualify for additional funding, with a spokesman saying:

“HS2 will be a vital part of our national infrastructure, boosting regional growth across the country and providing vital capacity the UK needs to compete in the global race. Under existing arrangements we would not expect the Welsh Government to receive Barnett consequentials of spending on the national rail network.”

Whilst supporters of HS2 tried to dismiss previously unreleased sections of a report by KPMG, which showed many areas of the UK would lose out economically by HS2, the release of Barnett funding to Wales is in effect an admission that Wales will not benefit from HS2.

Plaid Cymru leader Elfyn Llwyd MP had told Parliament ten days ago that Wales should get a refund of up to £4bn if the HS2 “vanity project” goes ahead, whilst the Belfast Telegraph recently reported that Northern Ireland should receive £1.3bn, which together would add £5.3bn to the cost of the project. What is unclear is whether or not (notwithstanding the result of the Independence Referendum) Scotland would qualify for any payments. While it is claimed Scotland will ‘benefit’ from classic compatible HS2 trains running on existing lines north of Manchester, the newly released section of the KPMG report estimated annual economic losses as a consequence of HS2  for Aberdeen (£220.48m), Glasgow (£76.97m), Dundee & Angus (£96.46m), Falkirk (£17.61m), Stirling & Clackmannan (£7.74m), & Renfrewshire (£3.47m).

“The award for Barnett money to Wales is a clear admission that HS2 doesn’t benefit Wales, it hurts Wales, the same way it hurts many other parts of the country. Northern Ireland is in the same boat and must now be due for a pay out too, and now this precedent has been set we are be talking about another £5.3bn which has to be added to the current £50.1bn costs of HS2. As we have always said and as keeps being demonstrated, the costs of HS2 will keep going up and the benefits will keep going down. It is time to go back to the drawing board, scrap HS2 and deliver the rail infrastructure improvements the whole country really needs.”