Ben Ruse, the lead spokesman at HS2 Ltd has taken to twitter to launch an extraordinary attack on opponents of the scheme, labelling arguments against the scheme as “Luddite nonsense” and saying in a tweet to the former photographer for the Yes to HS2 campaign Paul Bigland, who has previously been suspended by twitter, that Stop HS2 campaigners are becoming “Increasingly farcical, increasingly abusive and increasingly panicked.” 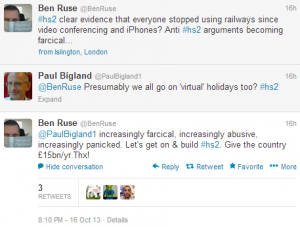 So abrasive and dismissive was his tone, that many people thought the twitter profile was a parody account, but it was confirmed by HS2 Ltd this morning that the account genuinely belonged to their lead spokesman, and condoned his comments stating in a tweet “Ben Ruse uses different channels to discuss project during working hours – Twitter is one.” 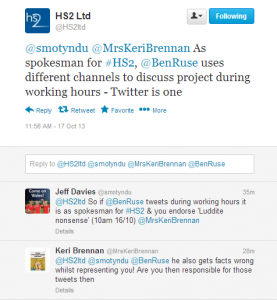 Unimpressed after this had been pointed out to him, Ruse defended an ‘exemplary record’ of high speed rail in the UK and effects on wildlife, by making comparisons to HS1, although the ‘Kent Principles’ which allowed this with HS1 have been completely abandoned with HS2, which will impact 350 wildlife sites. Ruse has also consistently repeated that it is a ‘fact’ that HS2 would be worth £15bn per year to the economy, despite the fact the KPMG report which suggested this has been roundly criticised by economics commentators and that the report itself contained a massive disclaimer: 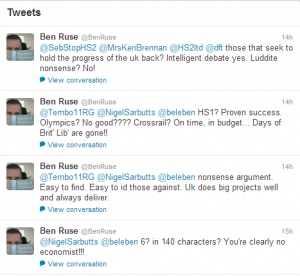 “In preparing this report, KPMG LLP have relied upon and assumed, without independent verification, the accuracy and completeness of the information upon which the report is based, including that available from public sources and that provided by third parties. The projections set out in the analysis have been prepared for illustrative purposes only and do not constitute a forecast. Whilst KPMG LLP has undertaken the analysis in good faith, no warranty, expressed or implied, is made in respect of the accuracy, completeness or appropriateness of its assumptions, calculations or results. No reliance may be placed upon the analysis by any party, except where specifically referred to in an agreed KPMG LLP letter of engagement. All users are accordingly advised to undertake their own analysis and due diligence before making any decision or entering into any commitment based on the information in this report.”

“The fact that the new head spokesman of HS2 Ltd has labelled Stop HS2 campaigners as ‘farcical, abusive, luddites.’, or that he thinks if he uses the word ‘fact’ it makes anything he says a fact no matter how specious it is, in his very first day in the job is no real surprise and neither is the fact HS2 Ltd have condoned his actions. He has even contradicted the testimony the DfT gave to the supreme court to try and make up an environmental case for HS2. This has been par for the course with HS2, in that proponents will make up anything they can to support their case, and attempt to demonise anyone with a contrary view. The only change is that this has not been the official stance of HS2 Ltd to allow Government employees to be paid to belittle the public on works time until now. A week ago Ruse tweeted that the next chapter in the campaign had started, and now we know what he meant.”

Ruse heralds ‘the next chapter in the campaign’ 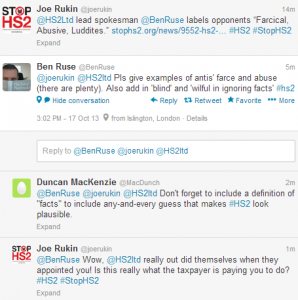 STOP PRESS – Twitter response to this article from Ben Ruse

“Given that Ben Ruse hardly ever used his twitter account until yesterday, and then suddenly starts tweeting aggressively at campaigners, the evidence suggests that’s his got the nod from his boss at HS2 Ltd to treat anti-HS2 campaigners like this.  That’s not the attitude you’d expect from a government owned company.”

“Unfortunately, we have seen very similar actions by other organisations who support HS2.  It shows that they realise the arguments have run out of steam and are resorting to underhand methods to get the project through.”

“The contemptuous social media comments from the HS2 spokesman tell us much about the government’s new PR “strategy.” They also show how far the government has come from the Prime Minister’s pre-election promise to remove publicly funded quangos from overt political debate.  Dismissing all opponents as “farcical” and “luddites” just prior to deposit of hybrid bill hardly makes  proper engagement with HS2 Ltd any easier. People living along the route deserve far better than this. Ministers and HS2 Ltd should be reining in their over-excitable cheer-leader before he does any further damage.”

“We have raised concerns about HS2 Ltd staff all the way to Chief Executive level regarding social media and it seems that their rights override the basic consideration of respect and fairness which the victims of HS2 deserve. Therefore their support for him and lack of concern for who he colludes with is no surprise. One of our main concerns is how these kinds of twitter trolls are finding out official information before stakeholders and the general public.”