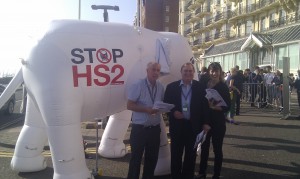 Yet another report has been produced reiterating arguments which have been put forward by the Stop HS2 campaign for the last three and a half years, this time from The Taxpayers Alliance. Just before the publication of the report, Treasury Secretary Danny Alexander claimed that HS2 is “essential”, but former Deputy Prime Minister Lord Prescott said the line “Will do nothing for the North”, telling Stop HS2 campaigners at Labour Conference that it was a “Rubbish Idea”.

In other news, David Higgins the CEO of Network Rail has been appointed as chair of HS2 Ltd.

“While David Higgins has been at Network Rail, their profits have dropped and their debts have increased to even more unpayable levels, so he will fit in perfectly at HS2 Ltd. This is exactly the sort of ‘expertise’ we have come to expect on this project.”

The report from the Taxpayers Alliance states:

The TPA report can be viewed here.

“We have always said that there are better, cheaper ways of delivering capacity on the rail network which would deliver that capacity across the network, benefitting more people and delivering those benefits more quickly than HS2. Why these are ignored in favour of HS2 is, as Ed Balls said, pure political vanity and pride. Proponents of HS2 have always wanted to keep quiet the fact that 32 towns and cities will have fewer trains, slower trains or no trains at all to London if HS2 goes ahead, so it is great that the TPA has shone a light on this issue. It is quite clear, ‘freeing up capacity’ can only mean ‘losing the trains you already have’. “

“With the political consensus continuing to break down, it is disappointing that Ministers are sticking with the tired rhetoric that this boondoggle is essential. Schools are essential. Hospitals are essential. Dozens of other services which are facing cuts are essential. A flashy boy’s toy which will only benefit the richest in society while everyone else pays for it is not essential.”

“Stop HS2 have pointed out time and again that the business case for HS2 depends on a huge reduction in services on the existing railways.  For the majority of people who actually travel on existing railways, HS2 will mean a poorer service than at present for most commuters and rail travellers.  It’s time the government stopped trying to pretend that HS2 is needed and started looking at where the real problems in the railway network are.”

“With the comments earlier this week from a range of senior Labour politicians, including Ed Balls and John Prescott, there is no longer a guaranteed political consensus.  Rather than trying to speed through the democratic process and race through the hybrid bill, the Government should take the chance to look again at this £50 billion project.”