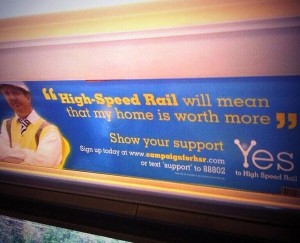 What the defunct Yes campaign would have you believe about property prices.

There is no change from a consultation which took place earlier this year in that home-owners living in the construction zone of 60 metres from the centre-line of HS2 would be eligible for what is effect exactly the same as statutory compensation. There would then be a ‘rural support zone’ which offers different schemes for compensation, with a boundary which will differ in different places after considering various factors such as topography. Beyond this, a ‘long term hardship scheme’ is proposed, which is similar to the current ‘exceptional hardship scheme’, in that people will have to demonstrate ‘hardship’. As of September 1st, 95 purchases have completed out of 493 applications on Phase 1. On Phase 2, there have been 27 applications, none of which have completed. These figures represent an 18% success rate from applicants. 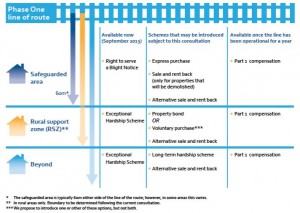 The consultation runs until 4th December, and documents can be found here.

“We have little faith in these proposals, as the vast majority of property blight is taking place outside the zones in which home owners are guaranteed to get compensation. Thousands of people who will have difficulty in selling their homes will have to apply to rehashed version of a scheme which so far has given nothing to over 80% of applicants.”

“We do not understand why this scheme is only for Phase 1 of the proposed route. The levels of blight experienced are no different whether you live in Warwickshire, Wakefield or Warrington. It seems unimaginable that the Government think they could implement two schemes for the same project. As such, we strongly advise anyone who thinks they could be affected by HS2 to respond to this consultation.”