The fightback on #HS2 begins today with the Transport Secretary, Patrick McLoughlin, highlighting the huge benefits to the UK & our economy. 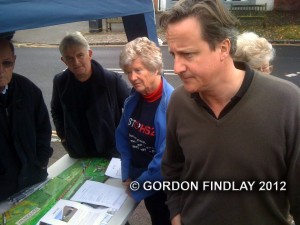 With the number of different people and organisations that have come out against HS2 in the last couple of months, as well as the latest poll showing that 55% of the public think it should be scrapped, HS2 is a project on the ropes.

In McLouglin’s speech yesterday, he referred to

The reason why we use the same criticisms again and again, is because the Department for Transport and HS2 Ltd have never provided a valid answer for them. As we defeat each argument, the DfT drops them temporarily to pull out another variation on a justification for HS2. With four Secretaries of State for Transport since the March 2010 announcement, civil servants might be able to fool ministers, but we have seen it before.

And so onto the £200,000 KPMG report published yesterday.

Firstly, it might have been published only yesterday, but it is already out of date. The report says it is based on the year old August 2012 economic case: but this will soon be superceeded by the next economic case due out this autumn.

Using old information is not unusual for supporters of HS2. The Public Accounts Committee earlier this week said that HS2 decisions were based on “fragile numbers, out-of-date data and assumptions which do not reflect real life”.

KPMG’s report has already been criticised, including by the BBC’s Robert Peston – What KPMG ignored when arguing for HS2, the Taxpayer’s Alliance and the IEA – IEA responds to new government analysis of HS2.

The Financial Times reported that Dan Graham, a professor of statistical modelling at Imperial College London who also advises the government on transport, had told them that

“These numbers really need to be scrutinised, otherwise they could turn out to be fanciful” and KPMG’s £15bn figure “seems to be on the optimistic side”.

We haven’t quite managed to Stop HS2 yet. We still need your help to keep up the pressure. But we can win, with your support.

Message to @David_Cameron: the best thing for politicians to do is give up the fight and cancel bad projects – like #hs2

email
Tags: News
News
One comment to “The Prime Minister versus Stop HS2”