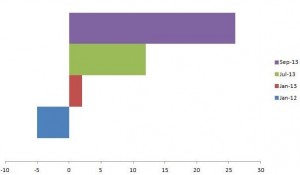 Graph showing the increase in overall opposition for HS2 over the last four YouGov polls.

Supporters of the HS2 project have been dealt a devastating blow by the latest YouGov poll on the project, which shows 55% of the public are opposed to the project. To make things worse for the coalition, the number of both Lib Dem and Conservative voters opposing HS2, now exceeds those in support for the first time, with both polling of both party’s supporters showing a 15% gap between opposition and support. At least half of voters from every major party now oppose HS2.

While polls have shown that there have been more people against HS2 than for it since January, this is the first poll which has shown that an overall majority of the public are opposed to HS2. The gap between those against the project and those for it has risen from 12% in June to 26% in September. Support for HS2 has now dropped to under a third at 29%, a 5% drop in just two months. In the same period, opposition has grown by 9%. 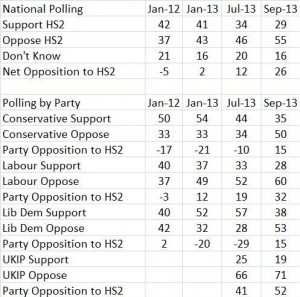 The biggest turnaround is in the attitudes of Liberal Democrat voters. In the space of just two months, support for the project has dropped by 19%, whilst opposition has grown by a staggering 25%. Within Conservative ranks support has dropped by 9% and opposition grown by 16%. Labour voters have been in overall opposition to HS2 since this January and they remain the largest sceptics within the three main parties, now opposing HS2 at a rate of 60% against 28%. UKIP supporters were included in the poll for a second time, with their levels of opposition also up to 71%, compared to just 19% in favour.

The poll data also shows for the first time that support for HS2 is outweighed by opposition in every region of the UK, with opposition being over 50% in every region besides London. The polling took place last week, before the criticism of the project from the Public Accounts Committee. 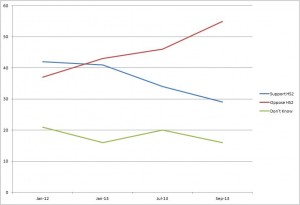 Graph showing how support for HS2 has collapsed since January 2012

“It is clear that the public have not been bought by the spin about HS2, and with every independent organisation going slating the project, they are right to. Besides the politicians who thought they could gain popularity by being associated with the project, the only people who think HS2 is a good idea are those with vested interests, whether that be councils and chambers of commerce in the handful of places getting stations, rail enthusiasts who think that any train is a good idea, or the companies who will stick billions of pounds of taxpayers money into their back pockets if this insane idea goes ahead”