The Campaign for the Protection of Rural England has managed to winkle information out of HS2 Ltd which has been kept secret so far, and clearly should have been made available during the public consultation for Phase 1 in 2011. Information relates to the impacts of construction and operation of HS2 and how the landscape will be affected. The information has seen the publication of impact maps which can be found at www.hs2maps.com.

In a statement, the CPRE said:

“HS2 was supposed to free up space on the railways to get lorries off  the roads, but people in dozens of sleepy villages many miles from the route will be finding out today that it could mean the opposite for them. The plans for building it would mean endless convoys of lorries taking to their local roads, at best destroying their peace and quiet, at worst putting local people’s lives in danger.”

“Less than ten per cent of the materials required to build HS1 were taken by road. ‘The Government seems not to want to try to beat the standard set by HS1 in terms of minimising HGV construction traffic on local roads. This simply isn’t good enough. If these roads are not going to break up under the strain, the Government needs to give additional funding to local authorities to tackle the maintenance backlog for roads in the areas likely to be affected. Many rural roads have no safe space for walking, cycling or horse riding, so new parallel paths should be considered along routes likely to be affected by construction traffic.” 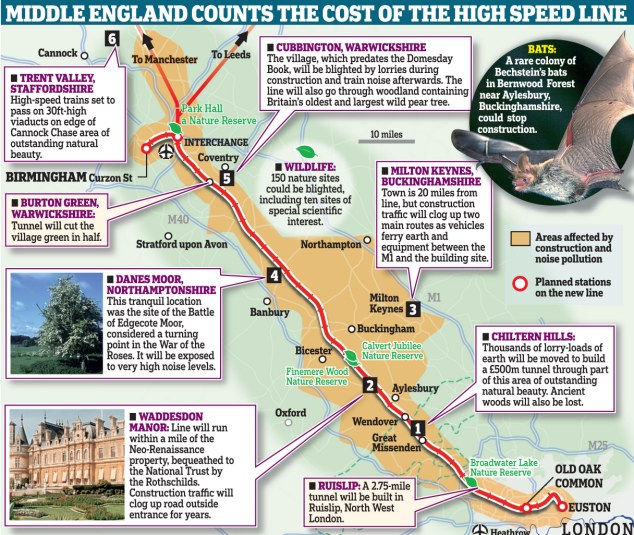 HS2 Ltd provided this excuse for not making these impacts clear in previous consultations:

“HS2 Ltd is still developing transport routes for the construction of the line, accordingly it is not possible to definitively say how the road network will be used. The information supplied to the CPRE is based on the most accurate assessment, given the progress of the line’s design at the time.”

Campaigners had hoped this would see a change of heart from CPRE at national level. Whilst local branches of CPRE have been very supportive of the Stop HS2 campaign, at national level CPRE have in most part become apologists for HS2 until this point. Despite having democratically set national policy of ‘five tests’ for HS2, none of which the project passes, CPRE have been unwilling to campaign against the project thus far. Sadly, on the day of publication of their maps, CPRE Chief Executive Shaun Spiers yet again missed the fact that those opposed to HS2 have consistently argued for upgrading existing rail infrastructure as an alternative to HS2, by stating on his blog:

“There are plenty of good reasons for questioning HS2, and I understand why those whose lives or favourite places will be damaged by it hate the whole thing.  But given Britain’s rising population and people’s annoying desire to move around the country, the alternative to HS2 is not the status quo: it is likely to be even more new roads than the Government is planning, and probably new runways too.  Given that choice, those who care about the countryside and the wider environment should still prefer a well-executed new high speed line to its likely alternatives.”

Joe Rukin, the campaign manager of the StopHS2 group said:

“After CPRE dragged information out of HS2 Ltd that they never wanted to be public, there are people waking up to find they will be affected by the project when they never expected to be. This information should have been available during the 2011 public consultation, or included in the current phase 2 consultation to make those consultations legitimate, but it’s bad news about HS2 so it’s been kept secret until now. This is standard practice for HS2, they will make up benefits with no proof and bury any bad aspects of the project. Until now, they have told anyone who asked that all construction traffic would go down the line of construction. It’s clear now that this has been a blatant lie.”

“It is really sad that given the fact they have uncovered the true devastation which HS2 will wreak on unsuspecting communities, that CPRE still have their head in the sands thinking it is a choice between HS2 and new roads. It is not. It has never been, but CPRE have bought the argument that it is impossible to upgrade the existing rail infrastructure since day one. They have national policy on HS2, five tests for the project, none of which it passes. When are they going to start paying attention to their own democratically set policy and come out against this white elephant which will trample it’s way through rural England?”