‘We believe that there are serious defects in the government’s proposals for HS2 and urge them yet again to reconsider their plans which have ignored the evidence of the damage it will cause to our residents, visitors and businesses.’

She added: ‘Whilst we consider the option of appeal we will continue to demand appropriate levels of financial compensation for Camden residents and businesses which we know HS2 has woefully underestimated the cost of.’ 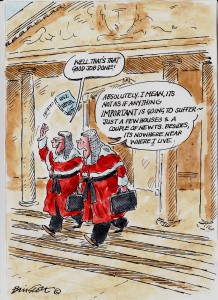 Next Stop for HS2, The Supreme Court.

“However, I am pleased Lord Justice Sullivan, one of the country’s leading environmental planning judges, has recognised that a Strategic Environmental Assessment is a key part of the process and should have been carried out.

“The comments in his judgement will make difficult reading for the Department for Transport and HS2 Limited.

“It will be interesting to see how the Government responds to this ruling. In the meantime we will carefully consider what our next steps will be on behalf of Warwickshire’s communities.”

David Elvin QC argued on behalf of the objectors:

“The level of parliamentary scrutiny in a proposed hybrid Bill would not meet the standard of scrutiny required by European law, given the all-party support for HS2 and the fact there would be a whipped vote”.

“We take heart of course from the Appeal Court’s decision to allow a further appeal to the Supreme Court on the environmental case but are bitterly disappointed that another battle in the Courts against HS2 has been lost.

“Today’s arrogant gloating from Tory Transport Minister Simon Burns MP adds insult to the recent injury of Parliamentarians remaining stuck in their Westminster fact-free bubble, voting 12-1 in favour for HS2, and against the overwhelming majority of people in Bucks.

“This second setback in the courts is of course very disappointing but even an Appeal Court win and almost certain government appeal to the Supreme Court would not in itself have changed the political realities or the need for a political response to kill off HS2.

“Only yesterday Conservative Prime Minister David Cameron was quoted in The Evening Standard as saying that HS2 is essential.

“He and the national Conservative party in particular need to keep getting the message that they are going to be hit hard over this issue at the next general election.”

On Thursday the latest legal challenge to High Speed Rail 2 was thrown out by the Court of Appeal. In a marvellous example of doubly negative legalese Lord Justice Richards ruled that “the judge was correct to find that it was not irrational of the SST (secretary of state for transport) to decide to proceed with HS2”. Without discussing the merits of the case, it is worth noting that in general, the best argument for the increasingly controversial project may be that it is in fact irrational.