The Department for Transport recently published forecasts for the road network and car usage. One document included the view of the DfT – or at least the road section of the DfT – that HS2 won’t reduce the need for new roads.(The SRN is composed of motorways and other trunk roads in England, and is managed by the Highways Agency.)

In 2026 the new High Speed rail line between London and Birmingham will be finalised, and in 2033 the second phase, the Y network from Birmingham to Manchester and the Yorkshire[sic], will be open to the public. This new line represents a major link connecting key urban and economic areas of the country attracting an important share of long distance passenger’s trips along its trajectory.

We complement the traffic forecasts presented in this section with an assessment of the impact HS2 is projected to have on car traffic on the SRN, using the demand projections produced by HS2 Ltd. HS2 Ltd forecasts that around 7% of its travel demand will be shifted from road travel. In 2037 this means that around 25,000 trips per day, equivalent to 0.9% of long distance inter-zone car trips will be shifted to HS2. This 0.9% is equivalent to one year’s traffic growth and highlights that the impact of HS2 does not affect the key facts and conclusion of this document.

What is of equal interest to those who are sceptical of the forecasts for HS2, is the graph on page 5 showing expected road usage up to 2040. In spite of the past decade of near static traffic levels, all DfT forecasts show increasing amount of road use. 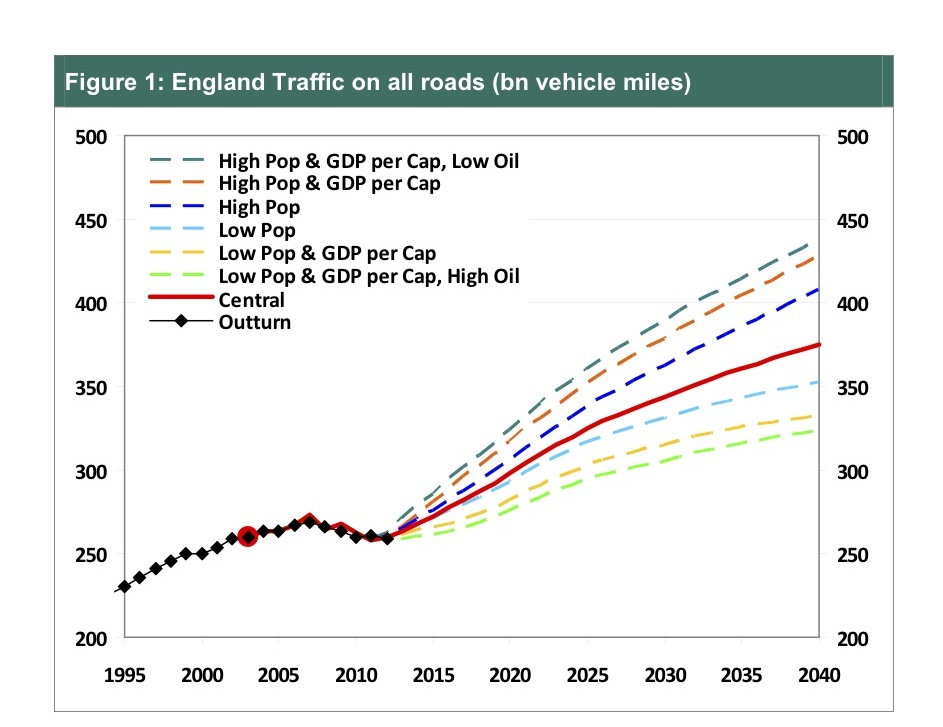 DfT traffic projections up to 2040