HS2 Ltd, the wholly owned subsidiary of the Department for Transport company has ‘lost all credibility’ according to Stop HS2 campaigners, after it announced an extension to the Exceptional Hardship Scheme (EHS) consultation yesterday (25th April), just two working days before it was due to close. Last Friday (19th April) the company announced a downgraded rebuild plan for Euston station after it transpired that the plans were half a billion pound over budget, and on Wednesday 23rd, the company caved into the inevitable, and accepted that tunnelling under Ealing was preferable to demolishing 18 bridges in the area, which would have included three and a half years of roadworks on the A406 North Circular at Hangar Lane.

87 days had passed since the consultation on EHS, the interim compensation scheme which would be in place for Phase 2 of HS2 opened on January 28th, when with just 4 days remaining before the April 29th deadline, HS2 Ltd announced they were ‘providing more information’ and the deadline would be extended until 20th May. It is likely that the decision from HS2 Ltd to provide more information was influenced by the recent high court ruling which stated they had not provided enough information regarding a previous compensation consultation relating to Phase 1 of the plans. In 2010, the HS2 Phase 1 EHS consultation was belatedly extended, as HS2 Ltd had not initially realised that consulting during the purdah period caused by the general election would not count toward the 12-week minimum legal length for such consultations.

Campaigners have been asking for this data since 2011. 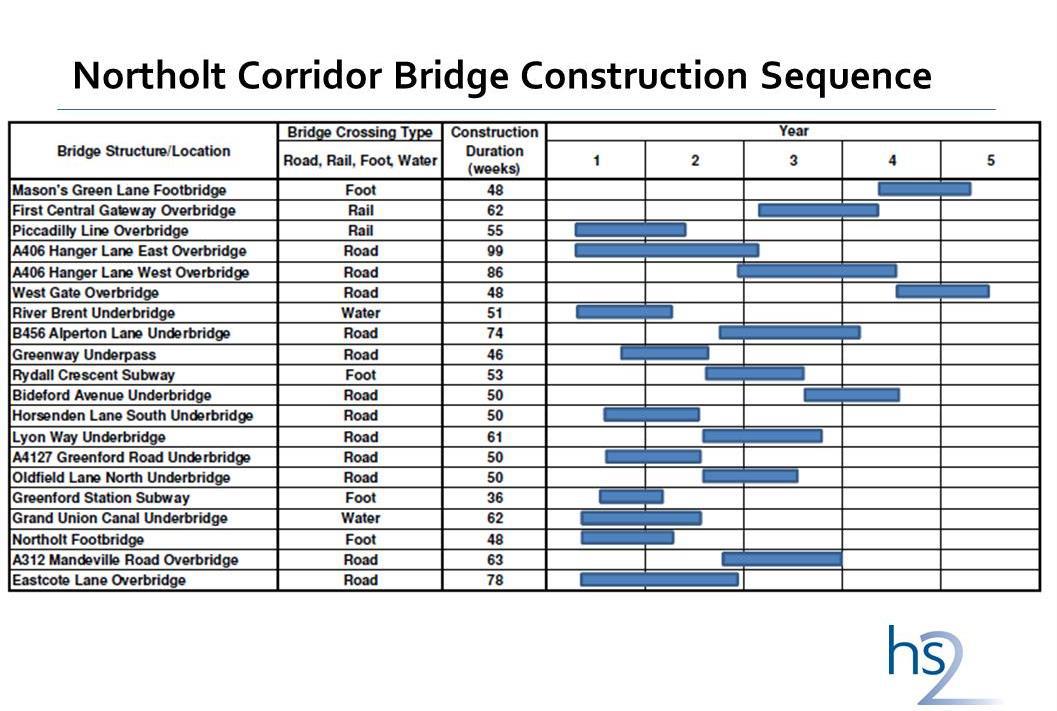 The roadworks timetable which had been planned for Ealing until now.

On Tuesday, after three years of insisting that HS2 would follow a surface route from Old Oak Common to Northolt, HS2 Ltd finally capitulated, saying that they would now tunnel this 9km stretch. The tunnel will join up with the tunnel under Ruislip which was added for similar reasons in January 2012 making a 14km tunnel out of London. HS2 Ltd have said that adding the 9km of tunnel this will not have an impact on the costs of the project, with spokesman Peter Fry saying: “The study we commissioned found that for this specific section of the line, the cost of tunnel would be comparable with a route on the surface without the need to replace bridges and divert associated utilities.”

Four and a half years of roadworks had been previously planned in the area. These two climb-downs from HS2 Ltd make it a hat-trick in the space of a week, as the company downscaled plans for Euston station last Friday after admitting they were half a billion pounds over budget.

Stop HS2 Campaign Manager Joe Rukin said:
“With a hat-trick of cock-ups in a week, HS2 Ltd have lost all credibility, if they ever had any in the first place. Just when you think they can’t display any more incompetence, they lower your expectations yet again. Thousands of people will have responded to the EHS consultation and then after twelve and a half weeks, with just a couple of days left they are told they have to do it all again. It’s clear that the only reason HS2 Ltd are doing this is that they have realised that it’s only fair to let people know how EHS has worked on Phase 1, and if they hadn’t have done, they’d be ending up with another judge saying they had conducted another illegal consultation on compensation.”

“HS2 Ltd just keep staggering from one disaster to another. In one week they have said they are half a billion over budget on just one station, then they say they’ve finally realised how much of a disaster what they were proposing for Ealing would be, but don’t worry they can add 9km of tunnel for a zero cost, and then they admit that three months into a consultation the information they’ve provided isn’t good enough. This tin-pot operation is a complete joke, and they keep getting away with it while taxpayers pay for their incompetence.”

On the subject of the EHS consultation, Penny Gaines, chair of Stop HS2 said:

“It’s another example of the astounding incompetence of HS2 Ltd. They’ve had this data since 2010, but have not seen fit to release it until 2013. HS2 have sat on it for the 2011 national HS2 consultation, the 2012 Phase 1 compensation consultation and now the 2013 Phase 2 exceptional hardship consultation. This has come within a week of HS2 Ltd admitting they’ve underestimated the Euston budget by half a billion and realising that Londoners had a point when they said HS2 construction in the capital be immensely disrupting.”

“But when you look at the report, it’s no wonder they’ve tried to hide it for as long as possible. The claimed pre-blight period includes data from after the announcement of HS2, and the zones studied vary randomly in width along the length of the line. But it’s worth noting that no matter how crude the analysis, the study’s author concludes that house prices and numbers of sales did fall in the affected areas due to HS2.”

Jo Mason, of the Church Fenton action group said:
“We raised £700 for leaflets, and had dozens of volunteers distributing them to let people know about the consultation, as the Department for Transport and HS2 Ltd haven’t contacted affected people. We sent over 500 responses, and now HS2 Ltd will be writing to them all. There are over 100 homes in our village are within 150m of the track but up until now only 3 people have received any communication what so ever. Our MP conservative Nigel Adams says he is disgusted at the way we have been treated.”

On the subject of the Ealing tunnel, Alex Nieora, Chairman of North Ealing Against HS2, said:
“It’s a great triumph for grassroots activism and for residents acting in cooperation with Ealing council. Finally they have taken the message, we are very happy and await further details. It’s great news for people who live near the line- residents, businesses and schools.”

Stop HS2 Campaign Manager Joe Rukin added:
“We have been waiting for HS2 Ltd to realise they were proposing the impossible for 3 years now. They have been talking about roadworks which would close parts of the North Circular at Hangar Lane taking the best part of four years. It’s unbelievable to think that a division of the Department for Transport even contemplated this, you can’t close Hangar Lane for four minutes without there being traffic chaos, let alone four years.”

“HS2 Ltd are saying that the cost of tunnelling might cost less than a surface route, and we can half believe that. They will talk of listening to the community and wanting to avoid disruption, but if that were the case, the whole thing would be in a tunnel. More likely is that HS2 Ltd had a ridiculously low budget for the overland route, and it’s only now they have figured it out properly that they have realised tunnelling would be a cheaper option than their revised overland budget.”