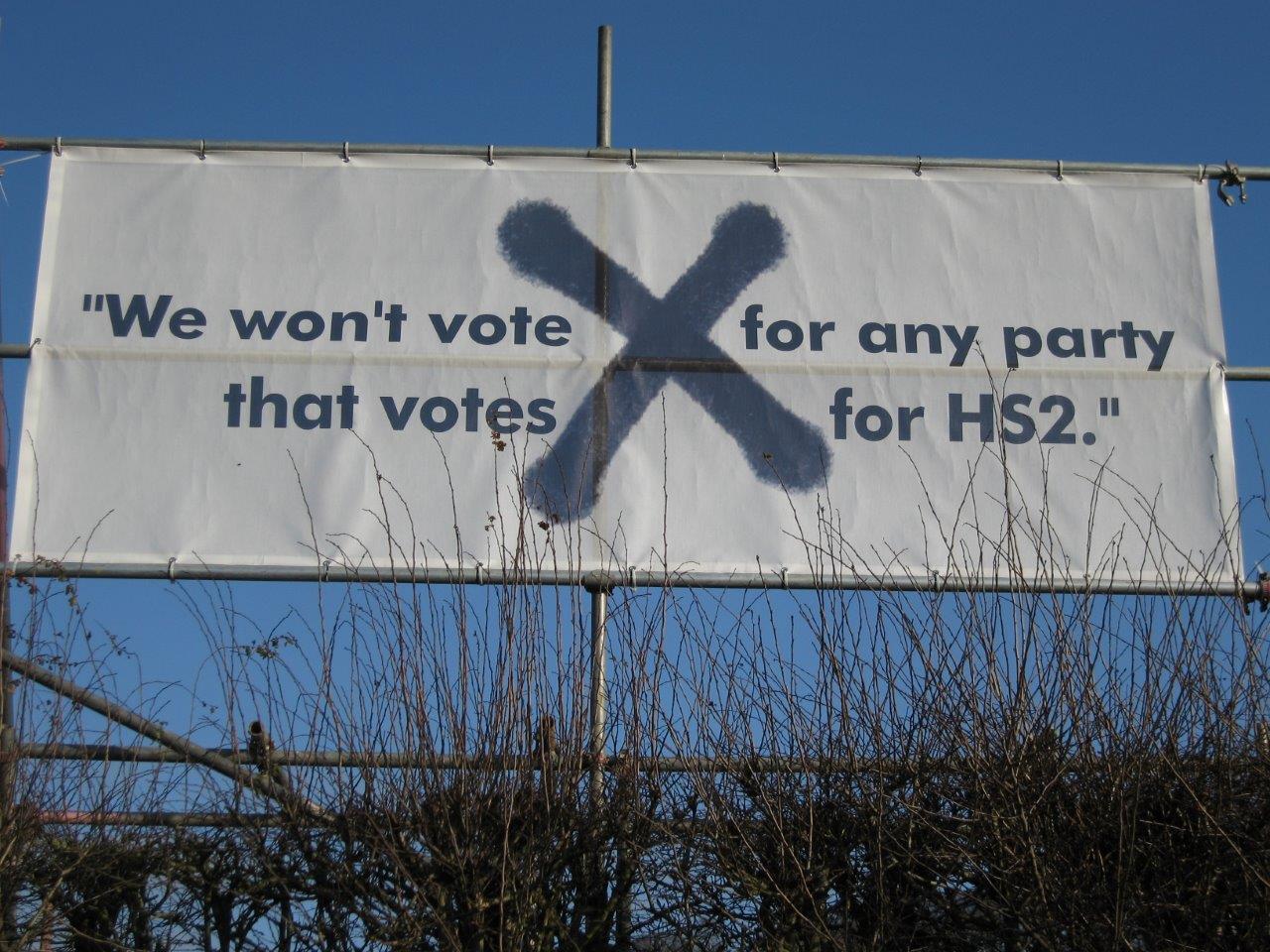 Banners like this have been up in the area around Chequers for a few years now.

HS2 is set to have a bearing on local elections on May 2nd, according to campaigners along the route. While almost all the local authorities along the planned route for Stage 1 have come out in opposition to HS2 and formed the campaign group 51m, many grassroots campaigners against the project are backing the slogan “we won’t vote for any party that supports HS2“. Whilst the three biggest parties in England support HS2, both The Green Party and UKIP are calling for HS2 to be scrapped.

HS2 is expected to be more of an issue in the areas affected by Stage 1 of the proposals, as there are still many since the announcement 12 weeks ago of Stage 2 who are unaware of what it would mean, but some areas are becoming more mobilised, and the upcoming elections are helping focus that awareness.

Stop HS2 Campaign Manager Joe Rukin said:
“Without doubt, the biggest internal conversation which has been happening in the campaign against HS2 in recent weeks has been what those opposed to HS2 should do come May 2nd. There are some who want to keep faith with current councillors for the work they have done in opposing HS2, but it is clear that a significant number are saying that they won’t vote for a party which supports HS2. I am certain that we on May 3rd we will be saying goodbye to councillors who have been allies over the last few years. That will be sad, but what is more sad is that their party leaders haven’t listened to them or us for three years, and we can only hope that after 2nd May they will know what localism really is and have no option but to listen. A few years ago there was lots of talk of people resigning their party over HS2. This has happened with party activists and donors, but it has been rare amongst candidates, and there may be more than a few who regret not taking a stronger stance.”

“There have been a lot of politicians on Stage 2 saying; ‘Trust us, we can move the route’ or maybe ‘We can get a station’. Well, the people they represent need to wake up, this simply isn’t going to happen and those politicians are ignoring the fact that this is a bad plan which had been badly thought-out and badly implemented. HS2 is a vanity project the country wouldn’t need even if it wasn’t bust. It is simply immoral to be saying that the route should be moved and made to be someone else’s problem when all the evidence shows the project should be stopped, full stop.”

Penny Gaines, chair of Stop HS2 said:
“People along the route of HS2 are very aware that their local services are being cut.  That’s things like local buses, libraries and health centres.  Local people, especially the elderly, the young and the people on low incomes, rely heavily on these services.  Meanwhile, the government shows how out of touch with these needs they are, by planning a £41billion pound spend on a railway which will be used by the richest in society.

“HS2 is a local issue.  It threatens the places they love, damages businesses and causes uncertainty and property blight in the areas in which they live.  HS2 costs local councils money because their staff are doing the work HS2 Ltd can’t be bothered to do.  Local people will look at their local councillors and candidates and ask themselves ‘what has this person done about HS2?  What is their party, locally and nationally, doing about HS2?’”

Seb Berry the country’s first Independent District councillor elected on a stop HS2 platform, said;
“After three years of having HS2 rammed down their throats by the coalition parties, many people will be sending the Prime Minister and his Deputy a clear Stop HS2 message on May 2nd by voting UKIP, Green or Independent.    It’s vital for the campaign that the pro HS2 parties get a hammering along the route.  The current political orthodoxy that HS2 will not cost the coalition parties votes and seats is not helping the campaign and needs to be turned on its head.”