This was originally published on Peter’s blog HS2 and the Environment.

In my blog Have you heard? (posted 12 Jul 2011) I reflected upon the possible reasons for the general incredulity at what they had heard – or not heard – of people leaving the HS2 sound booth demonstrations given at the 2011 roadshows. Since the visit of the Transport Minister to Japan, which I mentioned in my blog Turning Japanese (posted 10 Apr 2013), has got me back on to the subject of noise, I thought that I would take the opportunity to provide some further clarification of the comments that I made in Have you heard?.

I reported in Have you heard? that:

“The man from Arup told me that it had been assumed that these [noise absorptive] panels will reduce the train noise by around 20 dB.”

I said 20 dB because that was what I was told. However I now know that, if I had taken the trouble to read the glossy display panels that were provided at the larger roadshows, I would have seen the following diagram. 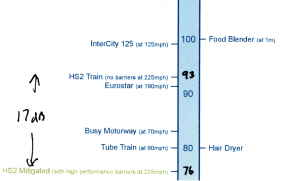 This is part of a depiction of relative sound levels, measured at 25 metres distance unless indicated otherwise, in the form of a thermometer diagram. Amongst other points on the “temperature” scale it shows “HS2 Train (no barriers at 225mph)” and “HS2 Mitigated (high performance barriers at 225mph)” – the latter is in green. No sound level figures are provided for these two points, but I have scaled them off from the diagram and written them in (93 dB and 76 dB). So according to this diagram, the assumed effect of mitigation is to reduce the sound level by about 17 dB, not 20 dB. Now that’s not a whole deal of difference, but I am pleased to put the record straight.

Further confirmation that my rather rough and ready determination of the mitigation benefit yields about the right answer may be obtained from the response to a request for information under the provisions of the Environmental Information Regulations (EIR) 2004 (FOI11-240B) provided by HS2 Ltd on 27th July 2011. Section 2 of this response gives some noise level figures for the Wendover sound booth demonstration. We are told, in section 1.2, that the mitigation assumed is “3m effective absorptive noise barrier” and that the demonstration is at a point that is 150 metres distant from HS2. Section 2 tells us that the “unmitigated HS2 train” sound level at the observation point is 79 dB LpASmax and that the “mitigated HS2 train (3m effective height barrier)” sound level is 63 dB LpASmax, so the assumed mitigation is 16 dB.

What FOI11-240B does not explain is what assumptions have been made to arrive at the 16 dB of mitigation used for the Wendover sound booth demonstration, so I submitted a request under the EIR provisions myself to seek this further information (FOI13-580). The response that I have received is quite enlightening; it illustrates just how important the assumptions made about noise source heights are to the calculation of barrier efficiency.

HS2 Ltd appears to have gone for the best possible case that the train noise source is “at rail level”. This assumption appears to be at variance with the supposition made for the Appraisal of Sustainability (AoS) of an “effective source 2m above head of the rail” for train speeds in excess of 300kph, as explained in the document Noise Source Height of High Speed Trains for the Appraisal of Sustainability. This document shows that this higher noise source height gives a better fit with data measured by SNCF and results in a calculated noise barrier efficiency of 10 dB, a very significant 6 dB less than assumed for the sound booth model.

I am rather at a loss to understand why HS2 Ltd has made different assumptions about effective noise source height for the sound booth demonstration and the AoS, and rather concerned that the sound booth model may be underestimating the noise level as a result. However, I think that it is only fair to give HS2 Ltd the chance to explain and have submitted a further request under the EIR provisions (FOI13-603) seeking this explanation.

I will let you know what HS2 Ltd has to say.