For more pictures, see the Ealing Against HS2 website, where this was first published.

NEAHS2 held a protest march against HS2 plans on 23 March 2013 walking along the Broadway from West Ealing and finishing outside Ealing Town Hall. The march was very well attended, despite arctic temperatures, strong winds and snow – showing the strength of feeling of people in Hanger Lane, Perivale, Greenford and Northolt and their resolute opposition to HS2 plans to blight to North Ealing. North Ealing is already feeling the brunt of Ealing Hospital and Central Middlesex Hospital A&Es and maternity units closing, leaving the London Borough of Ealing with no A&E hospital. Greenford Police Station has also closed and there are primary school shortages. Some primary schools, such as Willow Tree school in Northolt and Vicars Green School in Perivale have long term expansion plans – but are located right by the proposed overground HS2 route. 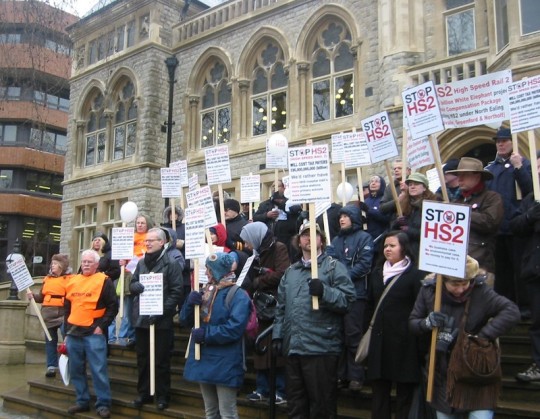 As protestors chanted ‘HS2 – No Thank You!’ on the steps of Ealing Town Hall, cars passing by on the Broadway sounded their horns in solidarity. Local residents have had enough. 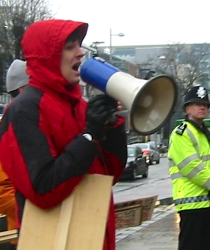 Speeches of opposition to HS2 plans were given by Dr Onkar Sahota, London Assembly Representative for Ealing and Hillingdon and Ealing Council Leaders and councillors, both Labour and Conservative, as well as UKIP Hanger Hill councillor Benjamin Dennehy, who said his party opposes the entire HS2 plan.