A couple of weeks ago, the Leigh Journal announced a proposal by Transport for Leigh, backed by local MP Andy Burnham, for a regional HS2 interchange station near the town. 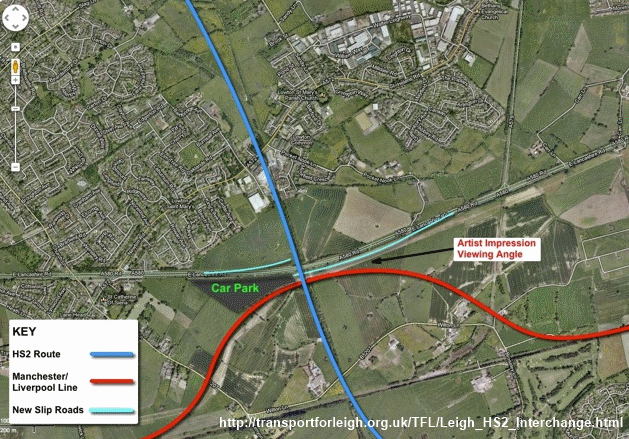 Transport for Leigh has been campaigning for a station near Leigh for a while, with the founder, Ged Tyrrell, having met Network Rail in 2011 to discuss his plans.

The thing is HS2 Ltd have made it very clear from the start that they want to minimise the number of stations. In November, Damien Henderson, reporter for Herald Scotland, described a meeting with HS2 Ltd in 2009:

“When I spoke to Sir David Rowlands, the then chair of the government’s HS2 delivery company, in 2009, he was clear that a significant danger for Scotland was that too many cities would want to be included in a high speed rail route. The more stations you have, the slower the journey between the beginning and end points. The more freight and local passenger trains you have, the less space there is for those 250mph bullet trains.

“Instead of high speed, Sir David feared it would become a “medium speed” route as trains stopped at places like Carlisle which have a relatively low population density. When I asked Mr Steer last week about Carlisle he said it would be “barmy” to build a new line north and south of the city and not include it. So clearly there’s a difference of views there.”

In Phase 1, HS2 Ltd have already rejected stations at Milton Keynes (on the grounds too many people would use it), at Aylesbury and at Bicester (for Oxford). In Phase 2, HS2 Ltd have ignored Stoke-on-Trent.

So whatever the merits of a local station at Leigh, HS2 Ltd aren’t going to build an interchange there.

email
Tags: News
News
2 comments to “A station at Leigh?”